The hazmat-esque suit worn by the COVID-19 healthcare worker is reminiscent of the dramatic head-to-toe coverings worn by the Plague Doctor of the 17th century. Infectious diseases have tormented human civilizations for thousands of years and have caused widespread devastation of entire communities. Even before globalization and the advent of mass cross-continent transit, parasites and pathogens traveled along trade routes and evolved along with the human population. Although many plagues and epidemics had been reported for a millennium, the Justinian Plague during the reign of Byzantine Emperor Justinian (527-565 CE) was the first pandemic in history to be fully documented (Procopius of Caesarea - 500-565 CE). This plague, with its classic buboes, began in 541 CE and killed at least 25% of the population of the Mediterranean and Southern Europe over 3 years, ending Justinian's plans to re-unite the Roman Empire and eventually leading to the downfall of the Byzantine Empire. Periodic cycles of plague occurred through the Middle Ages, one (Black Death) killing at least 25 million people in Europe between 1347 and 1353. 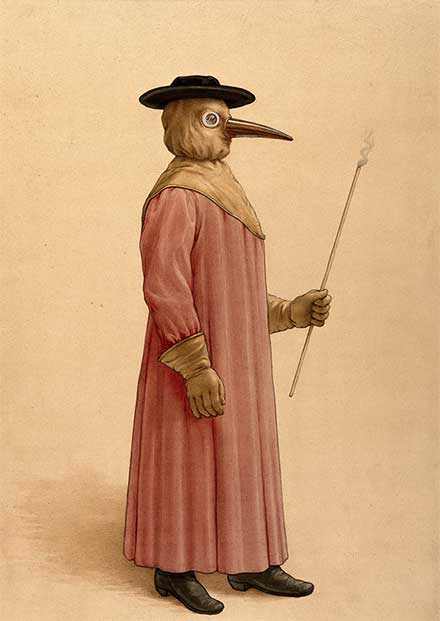 The etiology of plague was erroneously believed to be caused by foul-smelling bad air (miasma) emanating from the earth. To protect themselves when seeing patients, doctors wore protective coverings. The classic Plague Doctor's suit was reportedly designed by the physician to French King Louis XIII, Charles de L'Orme, and was depicted in many classic wood and copper engravings of the time. The outfit consisted of leather boots, gloves, and pants, along with a long heavy coat and a wide brimmed hat sealed with animal fat. The most important and recognizable piece of clothing worn by these Plague Doctors was the bird-like face mask with its glass eye coverings and a long beak filled with herbs and other aromatics that served as air filters. These doctors also carried a wooden stick to examine patients for swollen lymph nodes (buboes) or gangrene (hence, Black Death). Although the bubonic plague was transmitted via fleas, the Plague Doctor's suit did provide some personal protection, as Yersinia Pestis could also be transmitted from contaminated bodily fluids or tissues (or respiratory droplets, as in pneumonic plague). Although there was no cure, the Plague Doctor had an important role in tending to the sick, even at the risk of becoming sick himself. Without effective treatments, the Plague Doctor became a notorious symbol of death. Their outfits can be seen as a precursor to today's COVID-19 healthcare worker's protective garments. 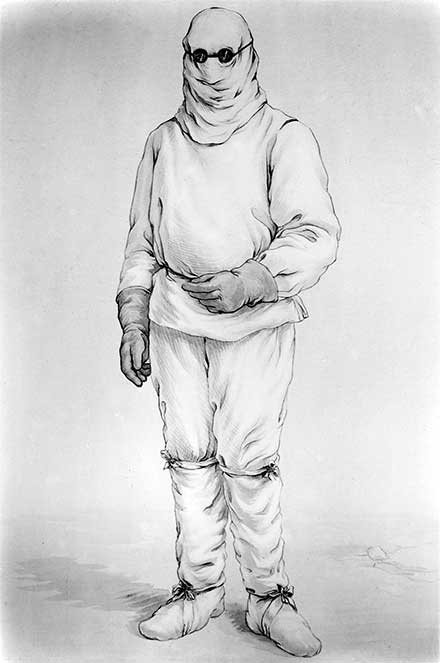