AUA Summit - The Hunger Disease Study in the Warsaw Ghetto

The Hunger Disease Study in the Warsaw Ghetto

The Warsaw ghetto was the largest of all Jewish ghettos in Nazi-occupied Europe during World War II. It was established in 1940 in German-occupied Poland, with more than 400,000 Jews from the vicinity crammed into an area of 1.3 square miles. For 18 months, thousands of Polish Jews, as well as some Roma from smaller cities and the countryside, were brought into the ghetto, while diseases (especially typhus) and starvation kept the inhabitants at about the same number. Ration cards allowed ghetto residents only 300 calories of food daily, a small fraction needed for sustaining health. An official order dated April 19, 1941, states that “the basic provisioning of the Jewish Residential District must be less than the minimum necessary for preserving life, regardless of the consequences.” 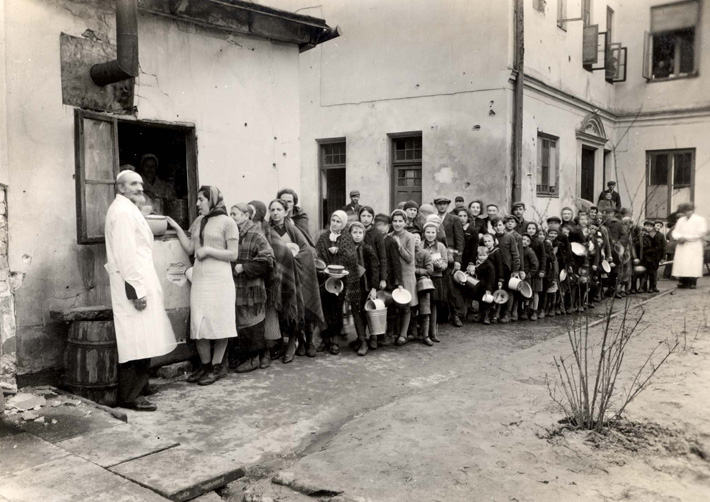 More than 100,000 of the ghetto's residents died due to rampant disease or starvation even before the Nazis began massive deportations of the inhabitants to the Treblinka extermination camp in July 1942. Between July and September 1942, about 254,000 ghetto residents were sent to Treblinka.

The daily life of Jewish doctors was beset with the same horrors as the rest of the ghetto population. The Nazis treated all Jews alike with no regard for education; physicians had no special privileges, other than temporary exemption from deportation.

It was under these circumstances that a group of Jewish physicians decided to study the effect of starvation on the people of the ghetto. The study was conceived by Dr. Israel Milejkowski, the head of the health department for the Judenrat, the Nazi-appointed Jewish government of the ghetto. He wanted to leave a scientific record of the extent of starvation in the ghetto and a record of the extraordinary dedication of the Jewish physicians working in the ghetto. Against starvation, the physicians had no remedy other than food, and that was not to be had. All they could do was study the famine-stricken. They decided to use the horrors of their daily existence to advance medical science, a touching demonstration of faith that humane studies would survive the war. 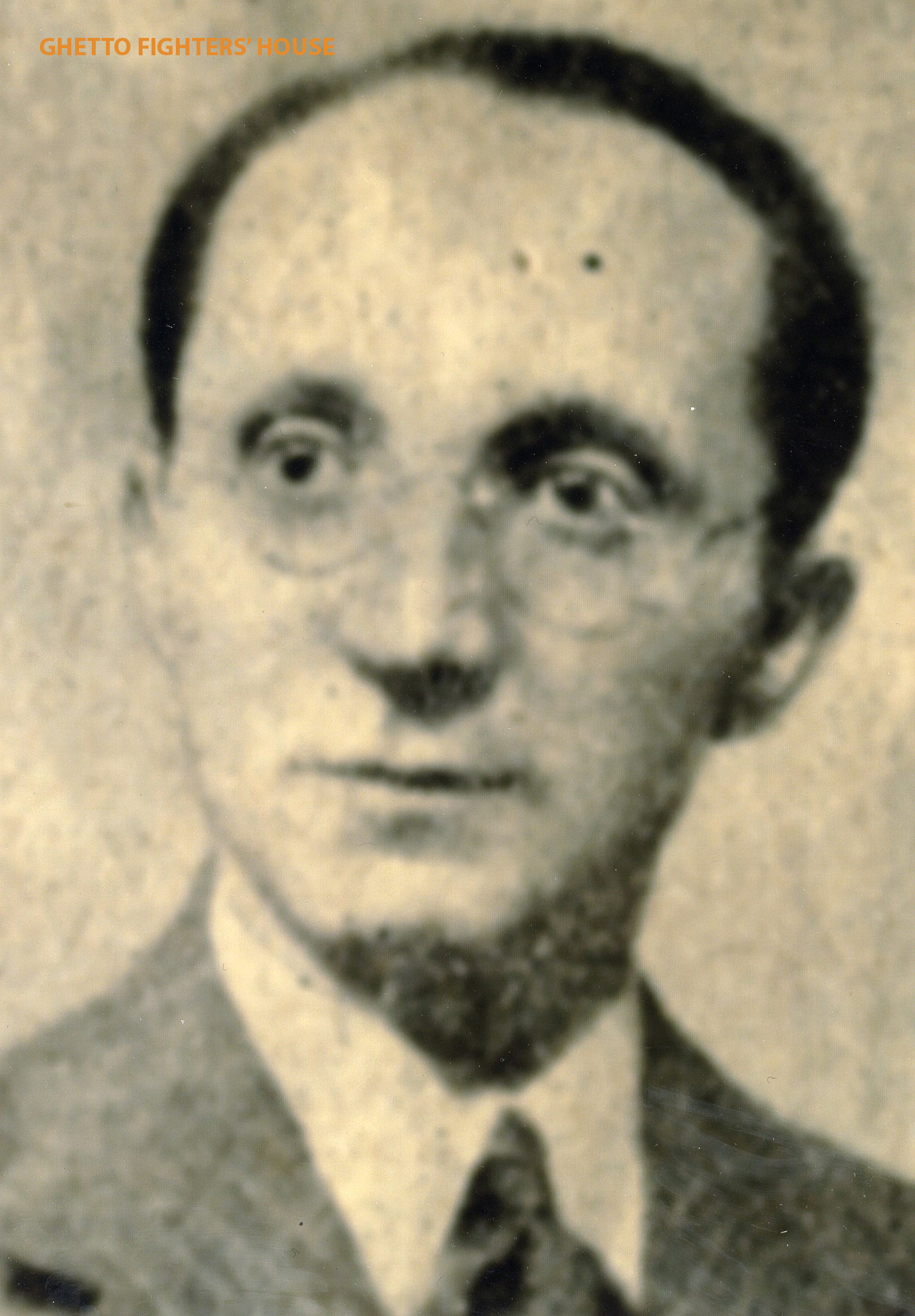 The ghetto doctors were driven by scientific zeal to use the great wealth of material available to them because at no other time in modern history had here existed such localized mass starvation in the presence of comparatively good medical facilities. Studies on starvation had been done in World War I, but they had been limited in scope and many questions had been unanswered. Answering these questions became the goal set by these doctors.

An organizing commission was set up in November 1941 to develop a plan of work, to find resources and to make assignments. Working out the details of the research project was vigorously pursued. All sorts of obstacles, both physical and psychological, had to be overcome. By February 1942, all was ready, and the project formally got underway in two hospitals in the ghetto (Czysta Hospital, the only adult hospital in the ghetto, and the Bauman-Berson Children’s Hospital), although some preliminary work had already been done. 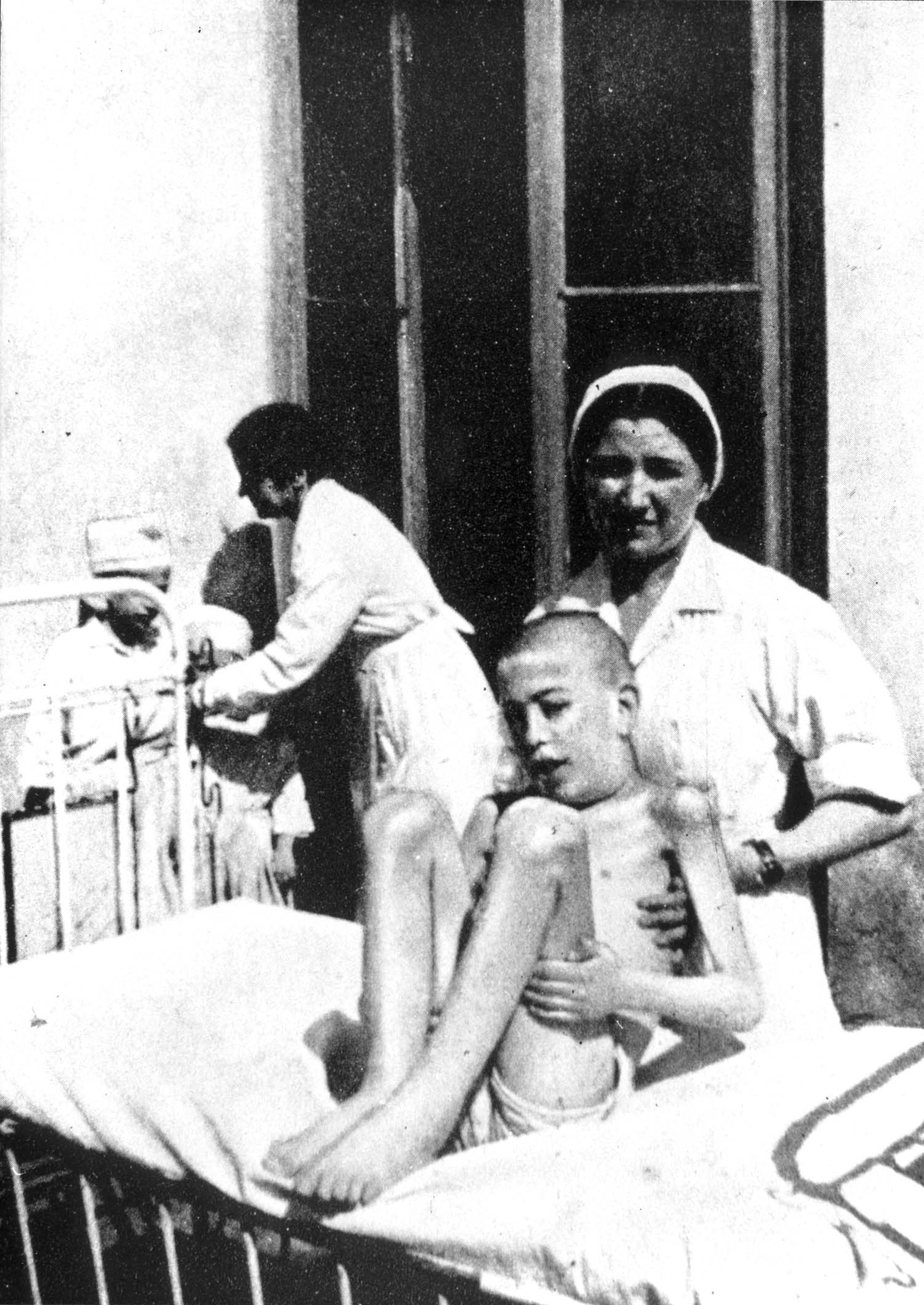 Starving boy at the Berson and Bauman hospital in the ghetto, Warsaw, Poland, 1942. Courtesy Yad Vashem

The work actually consisted of two separate studies. The first was a careful clinical examination of every patient who was admitted to the adult or children's hospital with a primary diagnosis of "hunger disease." The diagnosis was made if the patient consumed less than 800 calories per day and had no obvious evidence of any other disease. In children, the number of calories consumed was much lower, the exact amount depending on the child's age. The second study was a careful research of the metabolism and circulatory dynamics in patients suffering from hunger disease alone, with no accompanying other disease. The state-of-the-art measurements in these studies were made using equipment smuggled into the ghetto from hospitals on the outside.

The results of these studies showed that the body made a series of complex circulatory and metabolic changes during starvation. Metabolic output is very low, with even resting metabolism well below normal. Most of the clinical changes—the slow heartbeat, the low temperature, the lack of movement, the shallow and slow breathing—were to conserve energy. The body itself began to provide fuel. First, the limited amount of carbohydrate stored in the liver and muscles, glycogen, was used up. Then fat became the primary fuel. This could last from weeks to months, depending on how much fat the person started with and the exact number of calories in the diet. Finally, protein was broken down, and muscle tissue began to waste away.

After these measurements were made, re-feeding was begun. It was found that the adaptation to starvation did not reverse evenly when abundant food became available. The metabolic changes reversed quickly, yet the circulatory changes took much longer. This situation put an extra strain on an already weak heart, and the person went into heart failure. Repeated observations were made, checked and rechecked, and the findings summarized in charts and tables on a scale never before done in a study of this nature. 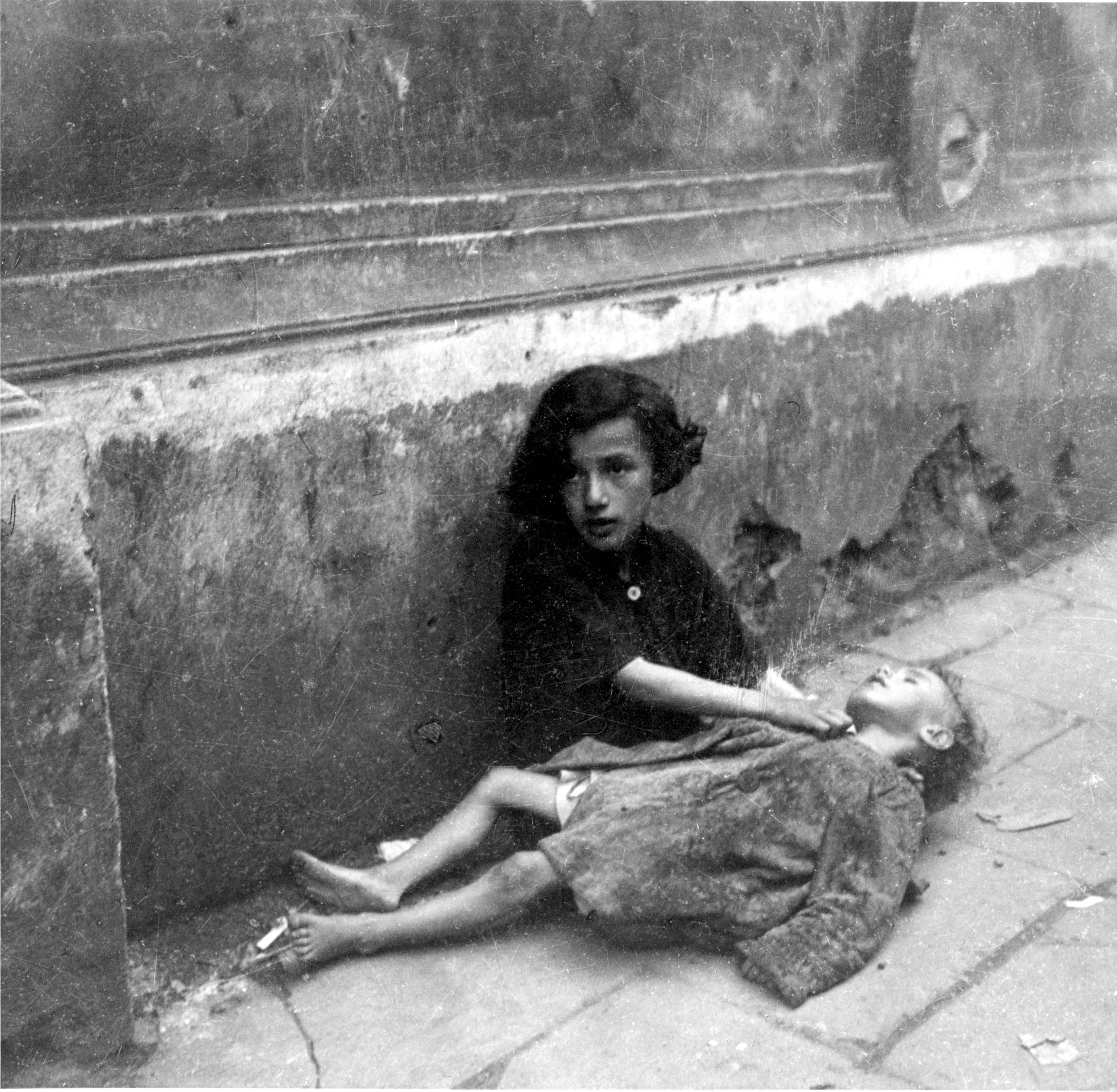 Starving children on the pavement in the ghetto, Warsaw, Poland.
Courtesy Yad Vashem

On the basis of their findings, the Warsaw doctors came to the conclusion that prolonged starvation in human beings leads to a specific disease entity, which they called “starvation disease.” They regarded this disease as one of adaptation to a peculiar, prolonged and ungovernable stress-calorie deficiency.

On July 22, 1942, just when the studies were going full swing, mass deportations from the ghetto began. The work was suddenly interrupted but not abandoned. The charts and tables, the painfully gathered data, the rough drafts, all that was available, were hurriedly gathered together and carefully hidden, lest they be lost. Whatever had been saved of the accumulated data was systematized and edited. This final stage was carried out in one of the buildings in the Jewish cemetery. Those physicians still remaining in the ghetto held meetings at the risk of their own lives to decide what should be included in the manuscript. They had no hope that they themselves would survive to see its publication, but they went on with their labors nevertheless, confident that future generations would find in the research on hunger an inspiration for scientific investigation. 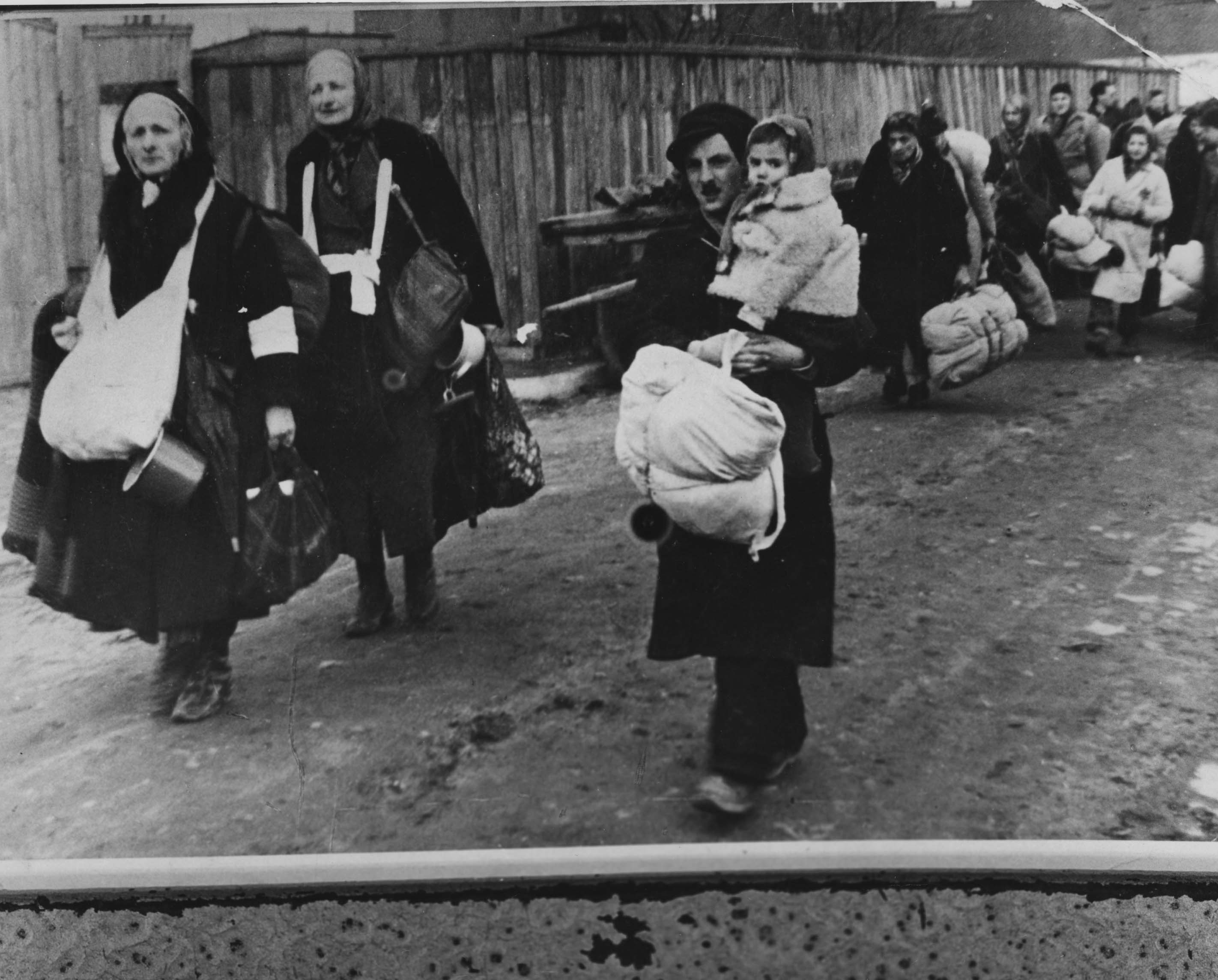 Shortly before the final liquidation of the ghetto in 1943, the manuscript was smuggled out. It was entrusted to a woman who acted as liaison with the “Arian” side. She handed it out together with a letter from the editorial committee to Professor Witold Orlowski, chairman of the department of medicine at a university hospital outside the ghetto in Warsaw. Professor Orlowski said, “I did not ask her name. In those days, knowledge of it might have been dangerous to her or to those who sent her.” The letter asked him to preserve the manuscript and have it published after the war if none of the researchers retrieved it. He did so. After the Germans had been driven out of Warsaw, one of the few surviving researchers, Dr. Emil Apfelbaum, reclaimed the typescript from its hiding place and passed it on in 1945 to the American Joint Distribution Committee. The entire manuscript was published in 1979 by John Wiley and Sons under the title Hunger Disease: Studies by the Jewish Physicians in the Warsaw Ghetto. 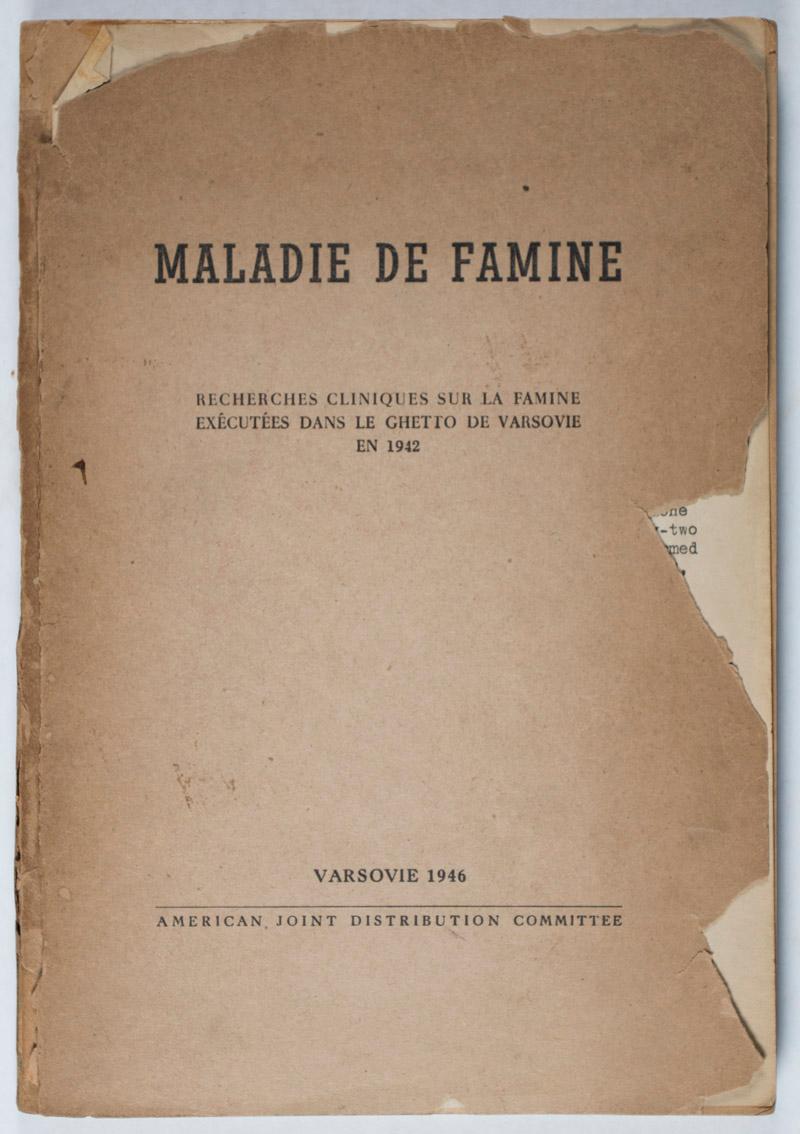 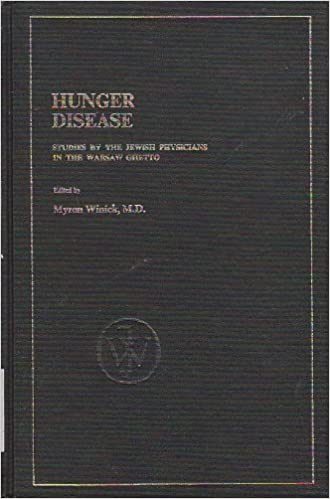 Dr. Apfelbaum succeeded in obtaining false identification papers and escaped from the ghetto at the end of January 1943. He remained in hiding on the “Arian” side until the liberation of Warsaw. After the war, he changed his name to Kowalski because, he said, “I hated the Germans so much I could no longer bear a German name.” He died suddenly, presumably of a heart attack, on the street in Warsaw on January 12, 1946.

Another doctor, Henryk Fenigstein, was captured by the Nazis in 1943 as the ghetto was burned. He was transferred to multiple camps, including Auschwitz, before going to Dachau, where he was liberated by the U.S. Army on April 30, 1945. Following liberation, he worked at UNRRA Hospital in Munich. In 1948, he joined the obstetrics and gynecology department at the Munich University Polyclinic before emigrating to Canada. There he had two successful medical careers, one as an obstetrician and the second as a psychiatrist specializing in the problems that confront many of the holocaust survivors and their families.

The project’s instigator, Israel Milejkowski, was sent to the extermination camp at Treblinka in 1943.The majority of the other researchers of the hunger disease in the Warsaw ghetto did not live to see the end of the war.

However, they left behind a set of highly valuable and meticulously recorded scientific data. Extraordinarily, the studies carried out by this small group of doctors were incredibly detailed and of very high quality, despite the difficult conditions under which they worked. Their studies were of a type that cannot normally be ethically carried out and, as a result, remain enormously valuable. 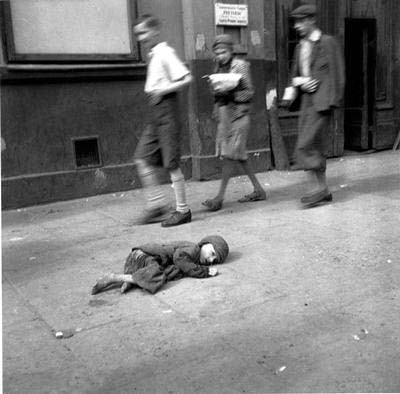 One of the findings in the Hunger Disease Study in the Warsaw ghetto, if known at the end of World War II, might have saved the lives of many of those subsequently liberated from concentration camps. When the concentration camps were liberated, the Allied soldiers, eager to provide aid as rapidly as possible, provided survivors with large amounts of food quickly, which proved fatal. In the first 24 to 72 hours, many of the emaciated people died.

Thus, this study was not only the first to document the complex metabolic and circulatory changes that occur during starvation but also the first to indicate the proper way to treat this condition. Re-feed people slowly!