Amidst the chaos and pressures of the escalating Civil War, military surgeons began to observe and record the outcomes of their interventions. In doing so, they established rudimentary standards of care that ultimately saved the lives of a higher proportion of wounded soldiers than had their better-educated European contemporaries. This was particularly evident in cases involving injuries of the genitourinary organs. Shortly after the war, documents appeared between from 1870-1888 which became the foundation for the Medical and Surgical History of the War of the Rebellion (1861-65) by J K Barnes now freely accessible at the National Library of Medicine website ( www.nlm.gov). The tome lists almost every wounded, injured, or diseased soldier registered and treated by Federal surgeons in their daily and weekly reports. 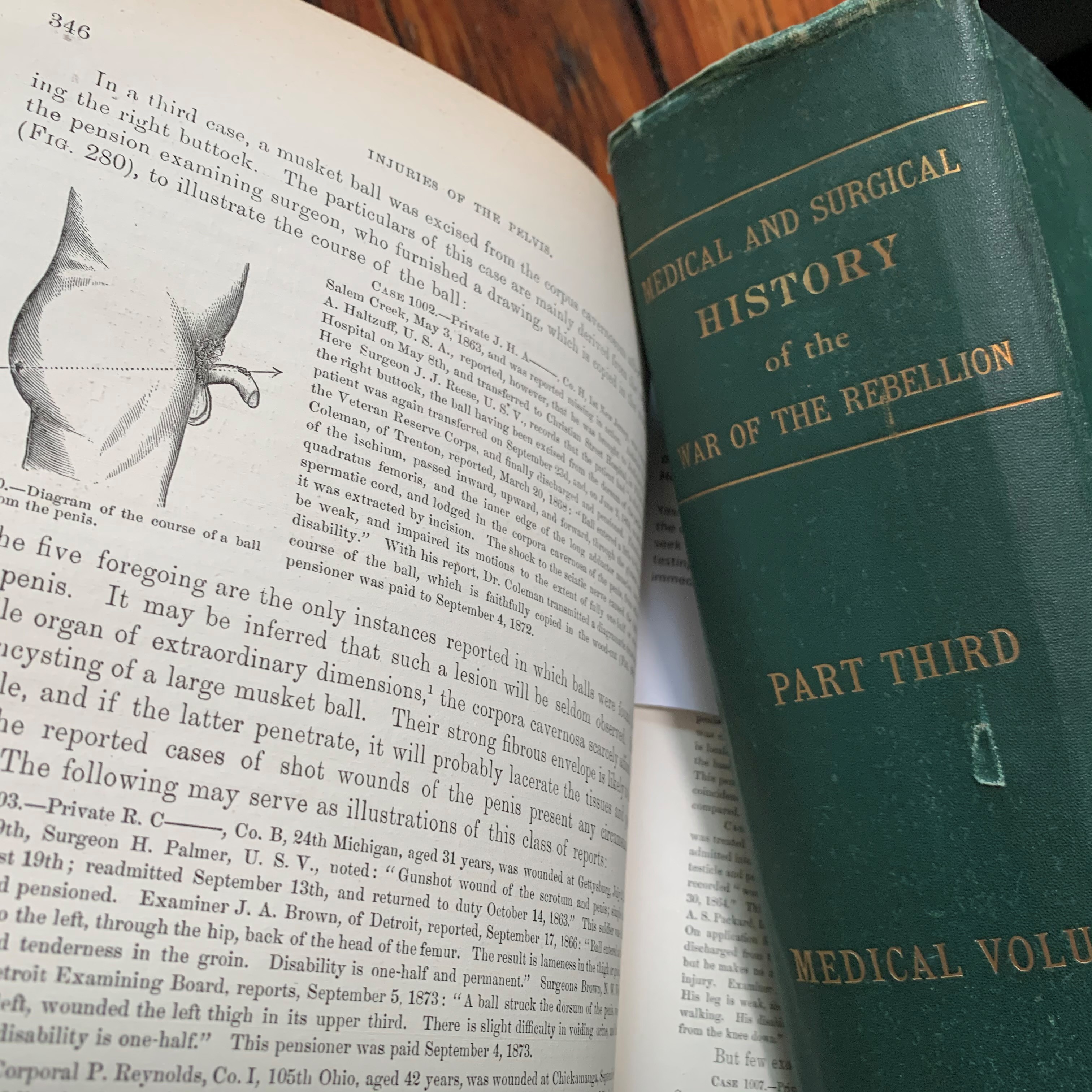 A Civil War soldier had a one in four chance of not surviving the war; one of every three shot in battle died of his wound. About 94% of wounds came from bullets, 5% were caused by artillery, and only 1% from saber or bayonets. Seventy-five percent of battle wounds involved the extremities, 10% were to the head and neck, and in 15%, bullets or shell fragments struck the chest, abdomen or pelvis. Urological injury was treated in 1,497 cases, representing 0.61% of all battle wounds. Of these men, 342 died, or 23% from any injury of the genitourinary tract, and 37% of urological injuries caused by pelvic wounds proved fatal.

Penetrating gunshot wounds resulted in 78 cases of kidney injury. Operations to repair or remove injured kidneys were unknown during the war, and army surgeons learned not to disturb flank hemorrhage.

A total of 185 cases of direct perforating bullet wounds to the bladder were documented. Half (52%) died of sepsis owing to extravasation of urine into the peritoneal cavity or surrounding soft tissues. Suprapubic cystotomy was shunned early in the war because surgeons feared that it facilitated rather than obviated urinary infiltration of surrounding soft tissues.

Only 8 cases document isolated bullet wounds to the prostate. Half of these were fatal owing to delayed hemorrhage from the prostate or pelvic veins, urinary retention and sepsis. Many other cases of indirect prostate injury were included with injuries to the bladder and urethra.

Less fatal than kidney or bladder wounds, urethral injury, probably more than other battle wounds, was the most troublesome and most likely to disable injured survivors for the rest of their lives. Dire consequences of a urethral injury included traumatic strictures, urinary fistulas and incontinence. Many men died months and even years later from recurring infections caused by urethral wounds. Col. Joshua Lawrence Chamberlain, credited with helping to save the Union Army at Little Round Top during the battle of Gettysburg, sustained an injury of the urethra at Petersburg and lived with a pervious penoscrotal fistula until age 85 when he died of urosepsis owing to pyelonephritis. 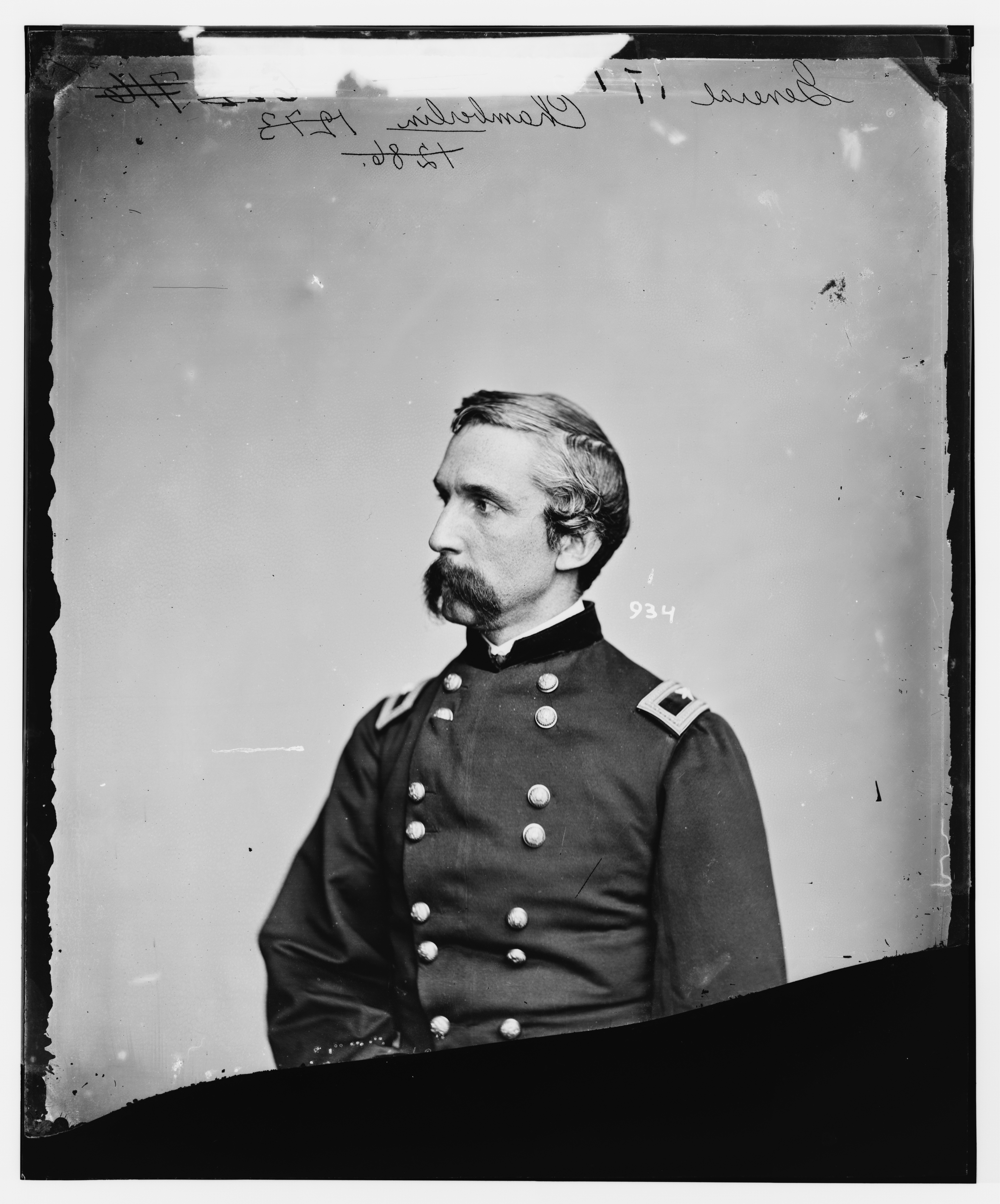 Surgeons recognized that when the urethra was torn below the urogenital diaphragm, survival was possible despite tremendous scrotal or penile edema. Absence of scrotal swelling was an ominous sign indicating that the urethra was torn above the diaphragm, discharging urine throughout the pelvis. They were also aware that forceful insertion of a catheter could aggravate an underlying urethral injury by creating false passages. Unsterilized catheters were reused over and over, and there was no lubricating jelly available to ease their passage. In some cases, perineal urethrotomy facilitated realignment of the urethra over a catheter passed both retrograde into the bladder and then antegrade out through the meatus.

Injuries of the penis

A total of 309 shot wounds to the penis although almost all were associated with injuries to the surrounding structures. Debridement of the penile wound was the rule, and erections were felt to hinder healing so sexual excitement and “lascivious thoughts” were strictly avoided.

Injuries of the testis

A total of 586 cases of testicular injury from missiles were recorded; 61, or 1 in 9, cases were treated by orchiectomy. Traumatic injury of the genitals presaged depression, and many pensioners were noted to have “melancholy thoughts and suicidal tendencies.” A total of 136 cases having “loss of virile power” or “impotence” were mentioned in association with injuries of the testis or penis.

Over 10 million cases of injury and illness were treated in just 48 months by Civil War surgeons. Surgeons cared for the insurmountable number of wounded men without intravenous fluids, blood products, antibiotics, sterile equipment, monitoring gauges, or x-rays. They operated outside, in field tents, or in general hospitals (when it was often too late), using crude instruments under inadequate lighting, without trained anesthesiologists or nurses, without fresh water for hand washing or hydration, and with soiled linens. Working against such incredible odds, army surgeons learned quickly and worked hard to improve their techniques. Surgeons organized medical societies to learn from each other’s experiences and debate the best methods of treatments. Civil War surgeons extracted the most information that they could from meticulous observations, published medical papers and educated others. The end result was a remarkably improved quality of American medicine as a whole.

Mr. Richard Turner-Warwick, the renowned British surgeon and expert in urethral reconstruction, probably put it best:
It is the urologist who has to share the burden of the ultimate urologic disability with the patient when the thoracic, the abdominal, and even the orthopedic aspects are long forgotten (personal communication).
His words ring true, then and now. 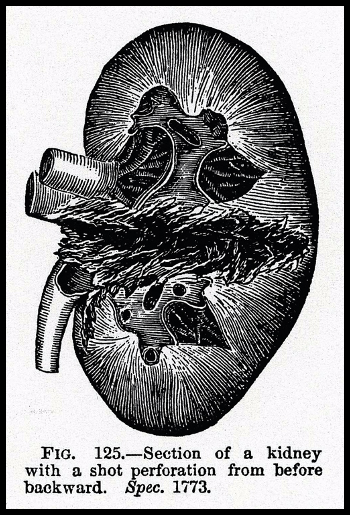 Figure 1. Renal Laceration. The ball entered the right flank at the 12th rib…”penetrating the right kidney, and was then deflected by the vertebral column, and passed upward through the duodenum, the posterior and anterior walls of the stomach, the left lobe of the liver near the umbilical fissure…Expired in an ambulance wagon on the way to Douglas Hospital…” (Specimen 1773, Case 452, August 1st, 1863) 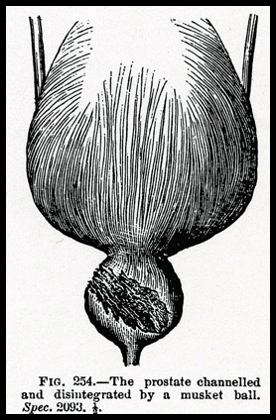 Figure 2. Prostatic Laceration (posterior view). "The ball entered the left hip…and made its exit in the right femoral region one inch below Poupart's ligament. Urine escaped from both entrance and exit wounds, but none from the urethra. Slight diarrhoea, accompanied by deep jaundice, occurred on the 30th. On June 4, 1863, the patient expired (Specimen 2093, Case. 805, May 22nd, 1863) 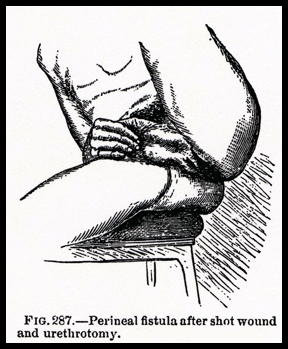 Figure 3. Chronic urethrocutaneous fistula. “The ball entered about three inches from the anus, passed upward, was then deflected from the right pubis, glanced downward through the scrotum, destroying the right testis. The urethra was severed in the membranous portion of the urethra. After unsuccessful attempts at catheterization…perineal section and urethrotomy was (eventually performed), and a silver catheter was introduced through the urethra…When (the catheter) was removed, the poor fellow was doomed again to disappointment… (Ultimately he was able) to retain…urine at will (but) obliged to close the perineal opening with the fingers, and the urine mostly passes by the urethra” (Case 1061 February 2nd, 1865)