"Happy people do not have sociology, they have traditions, institutions and laws." Moliere.

In 1946, Mexico had 23 million inhabitants, of which more than half were still illiterate. Mexico City (previously called the Federal District) then had just under 2 million inhabitants. During this period, and for three years, the UNAM (National Autonomous University of Mexico) was built, using 15,000 workers and hundreds of architects and engineers.

Before the SMU existed, there was need to treat patients with urological problems. There are reports of procedures done to release abscesses and kidney, bladder and prostate stones, among other ailments, since 1580, at the Hospital de Jesús, located in the heart of Mexico City.

The so-called Golden Age of Surgery in Mexico happened from 1870 to 1880, and was recognized worldwide since many of the surgical procedures carried out had international repercussions; urological diseases were included. It is said that in the last decade of the 19th century, several prostate specimens were sent to France and reviewed by Joaquín Albarrán, a Cuban physician who trained in Paris, who attested that the adenoma was completely removed.

In 1905, the Hospital General de México was inaugurated; it became the first institution to incorporate the Superior Urinary Tract Service in 1924, introducing the integration of urological care in other hospitals. Mexico’s Modern Urology had begun. In 1930, Dr. Fernando Ocaranza, director of the Faculty of Medicine at the UNAM (Mexico’s most important public university), approved the integration of a Urology class for the students in their 5th year of the BS.

In the early 1930s there was a group of doctors who had a special interest in attending to genitourinary medical-surgical problems, particularly Dr. Aquilino Villanueva Arreola, who was Head of the Health Bureau in 1928. Dr. Villanueva was the first to call for a meeting during the II Annual Surgeons Assembly (1936), which was the most relevant academic platform at the time and was held at the Hospital Juárez in Mexico City. The Sociedad Mexicana de Urología (or SMU) was founded on November 19, 1936. The SMU originated in the Hospital Juárez, but it was developed and consolidated in Pavilion V of the Hospital General de México (inaugurated in 1905), where the ordinary sessions took place for several years.

In 1950, the SMU organized itself in 6 sections for better regional control and each section selected a local representative to relay the decisions of the Board to local physicians and to identify their needs and concerns. In the 1990s, the 6 sections were restructured into 9.

The charter was signed by 34 physicians who had a special affinity for resolving genitourinary pathology.

Dr. Aquilino Villanueva Arreola
1st President of the SMU, 1936-1941
Considered to be the Father of Urology in Mexico

Dr. Aquilino Villanueva Arreola, was the first president while also Head of the Urology Service at the Hospital General de México, one of the most important hospitals in the Mexican capital. He is considered the Father of Urology in the country.

Since the founding of the SMU there have been 50 presidents, with their respective Boards of Directors, and 70 National Meetings. Each and every one has contributed knowledge, dedication and enthusiasm to ensure that our group is recognized as one of the strongest associations in Latin America, and also well-integrated as part of the South Central Section (SCS) of the American Urological Association (AUA).

Having an ambitious scientific program in mind has allowed the 70 meetings to fulfill their objective: to bring the most up-to-date urologic knowledge to the attendees. The icons of national and international urology have been invited to these meetings, and that has guaranteed their success. The social program, as a complement, spices up the traditional Mexican camaraderie and fraternity. Each year the number of participants has increased, and today it is the National Congress with the largest attendee presence, with around 2000-2500 people.

The First National Congress of the SMU was held in Mexico City from May 10 to 14, 1942. Since 1990, these meetings are held in the third week of November, taking into consideration the dates of the AUA, EAU and CAU meetings, which assures a great international attendance. We also take into consideration the hurricane season in the country.

We cannot fail to mention the serious coronavirus pandemic that prevails throughout the world at this time. In Mexico, the level of contagion is close to 800,000 cases and 82,000 people have died. For this reason, the 2020 meeting will be carried out virtually on November 20-22, 2020.

Once integrated, the SMU undertook the task of exhorting members to report their experiences, creating the Mexican Journal of Urology in 1943, coordinated by Dr. Villanueva but directed by the first editor, Dr. Arturo Lara Rivas. This journal has been published practically uninterruptedly since then and today it is known as Revista Mexicana de Urología. There have been 19 publishers who have aimed to improve their quality year after year. The editions are no longer printed but published every two months electronically in Spanish. The current editor, Luis Roberto Beas Sandoval, continues to ensure the magazine reaches all the requested quality standards.

In the 1940s there was greater interest by Mexican doctors to improve their urological training, expanding their studies in cities such as New York, Chicago, Boston, Paris, London and Milan.

Minimally invasive procedures gained relevance, as well as oncological surgery and urethral reconstruction. In Mexico, other important hospitals were developed in cities like Guadalajara, Jalisco, Monterrey, Nuevo León, well suited to address urological needs and help deconcentrate medical-surgical care in the country's capital. The cities where complex urological problems are now treated have joined the task of solving urological pathologies.

Our globalized world allows us to be as up-to-date as possible with the use of modern instruments and the internet, making it easier to access knowledge instantly.

Mexican doctors are not used to writing and publishing medical experiences. However, there is a select group of urologists who have written articles and books whose urological approach has been very useful for young doctors, who are eager for information on our specialty. Some of these well-known authors include:

Special mention is made of Dr. Héctor Manuel Sánchez López, who has written and published 13 books, eight of which are on topics related to Urology.

Although SMU started in 1936 with 34 founding members, over the years the membership has grown. We currently have a registry of 850 urologists. The Mexican National Council of Urology (CONAMEU) has 2,100 certified urologists. It is likely that there is an under-registration of 200-300 urologists who are not incorporated in either of the two associations registered in Mexico.

"Individuals can form communities, but only institutions can form a nation."
Benjamin Disraeli 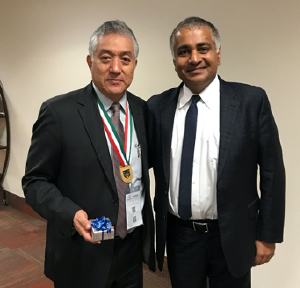