Tom Borden, MD was a longtime member of the South Central Section and the AUA and a longtime Chief of the Division of Urology at the University of New Mexico. 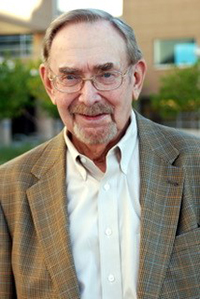 Dr. Borden, or the “Old Man” as he was affectionately known by the residents, was himself a resident under Dr. Charles Huggins at the University of Chicago. Most urologists know that Dr. Huggins won the Nobel Prize for Physiology or Medicine in 1966 for his studies on the hormonal control of certain cancers, notably prostate cancer. Dr. Borden always kept a picture of Dr. Huggins on the wall in his office and woe to the unwary intern or medical student who wandered into his office without knowing the significance of that photograph.

Dr. Borden was fond of telling Dr. Huggins stories and there are two or three that I remember. Those stories always left us feeling that Dr. Huggins was a real character.

The day that Dr. Huggins won the Nobel Prize, he and Tom were out having lunch together. Dr. Huggins was summoned for a phone call. This was before the era of the cell phone, so he had to leave the table to take the call. When he returned, Dr. Huggins grabbed Tom’s napkin, wrote something on it, folded it up, handed it back to him and calmly walked away without saying a word. Tom opened the napkin and it just said, “I won that prize.” Tom had no idea what the statement was referring to until he got back to campus and everyone was celebrating.

Another great story I remember him telling was about a birthday present he received from Dr. Huggins. For his birthday, Dr. Huggins gave Tom a pocket screwdriver and a list of one hundred things that one could do with a pocket screwdriver. That evening, Tom was at a fancy party with some important university people. He was talking to a chairman or dean when Dr. Huggins strolled up. Dr. Huggins asked him, “Tom, do you have that birthday present I gave you?” When Tom said yes, Dr. Huggins asked to see it. The dean or chairman he was talking to was nursing a martini with an olive in the bottom of the martini glass. Dr. Huggins took the screwdriver, speared the olive and ate it. He then turned to Tom and said, “That’s a hundred and one!”

Finally, Tom related the story about the moment that Dr. Huggins realized that castration might be a way to treat prostate cancer. As the story went, Dr. Huggins had a patient bent over the exam table as he was getting ready to check the patient’s prostate. The man was apparently endowed with a generous scrotum and Dr. Huggins observed the scrotum and its contents hanging there in front of him when the idea popped into his head. Dr. Huggins told the man (whose name I do not know), “Joe, I think there may be a way to help you, but it will require an operation.” The man replied, “Great, Dr. Huggins! What have I got to lose?”

Telling the tale, Dr. Huggins concluded, “And the next day he lost them!”