AUA Summit - The History of Microsurgery in Urology

The History of Microsurgery in Urology

The evolution of urologic microsurgery demonstrates how innovative surgeons converged advances in the fields of optics, engineering, suture design, ergonomics, and training to improve patient outcomes.

Microsurgery may have begun as early as 1921 when Sweden’s Carl Nylen first used a monocular microscope to perform inner ear surgery. Decades later, the American physician Dr. Sherman Silber combined efforts with the Australian Dr. Earl Owen to develop and demonstrate the success of microsurgical vasovasostomy (VV). Silber had previously applied microsurgery to arterial anastomoses in rat kidney surgery with 9-0 suture, but used 10-0 nylon in 1973 for the first two-layer VVs that improved spontaneous pregnancy rates from 40% to more than 70%. Silber then described the end-to-end epididymovasostomy (EV) in 1978 which produced a patent connection between the vas deferens and the epididymis, rather than the fistulous tract that was previously obtained by grossly suturing the vas deferens to the tunica of the epididymis. L.V. Wagenknect and his team at the University of Hamburg introduced the end-to-side EV technique in 1983, while Marmar and Thomas performed the first trans-septal crossed VV in 1985. Marc Goldstein described the two-stitch longitudinal intussusception technique now preferred by many microsurgeons for its simplicity and outcomes. Larry I. Lipshultz used the microsurgical technique for correction of epididymal pathologies not related to prior vasectomy, pushing microsurgery into more urologic areas.

These advances paved the way to other adaptations. Silber himself applied his skill in vascular microsurgery to anastomose the inferior epigastric artery and saphenous vein to their testicular counterparts in a complex 1975 orchidopexy, a technique furthered by Silber’s fellow, Marc Goldstein, who went on to pioneer the science of microsurgical varicocele repair and established urologic microsurgery training in New York. Microsurgical revascularization launched the possibility of penile salvage first demonstrated in 1976 by the orthopedic surgeon Susumu Tamai and the plastic surgeon Benjamin E. Cohen. Ira Sharlip used microsurgical techniques in 1981 to revascularize the penis by implanting the inferior epigastric artery into the corpora cavernosa of men with vasculogenic erectile dysfunction, improving erectile function in over 40% of treated men.

In 1993, Goldstein demonstrated motile sperm in human testis biopsy specimens, which were previously believed to only be present in the epididymis. The presence of motile sperm in the testes made possible the use of testicular biopsy and other tissue harvesting techniques to treat non-obstructive azoospermia. Peter Schlegel first demonstrated that testicular sperm extractions (TESE), originally described by Craft and Schoysman, could be performed with an operating microscope and improved sperm retrieval rates from 45% to 63% while decreasing the amount of tissue removed, setting a new standard.

Pioneering surgical techniques are dependent on advances in suture, ergonomics, instrumentation, and training. Many of the most important advances that enabled widespread acceptance of operative microscopy were unrelated to urologic practice. Robert Acland, an orthopedic surgeon, was essential in convincing Swiss instrument developers Spingler and Tritt to develop finer suture and needles that facilitated accurate suture placement. Acland was also instrumental in establishing optimal microscope height, focal length, and hand positions, establishing the current ergonomics of microsurgery. Technical improvement of the microscope, including integration of refined fiber optics and controls are attributed to Peter Horenz. Some instruments, like the Lipshultz Pattern Scissors, were developed by urologic microsurgeons who recognized emerging needs to further optimize surgical tools and procedures.

Formal fellowship training in urologic microsurgery was first introduced by Larry I. Lipshultz in 1981. The series of articles published by the Vasovasostomy Study Group, headed by Arnold Belker, during the 1980s is believed by many to have piqued interest in urologist microsurgery. The study results were published in 1991 and catalogued over 1400 patients who underwent microsurgical vasectomy reversal. 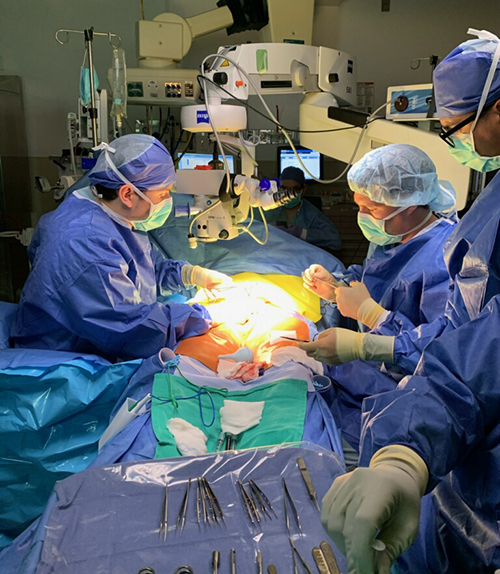 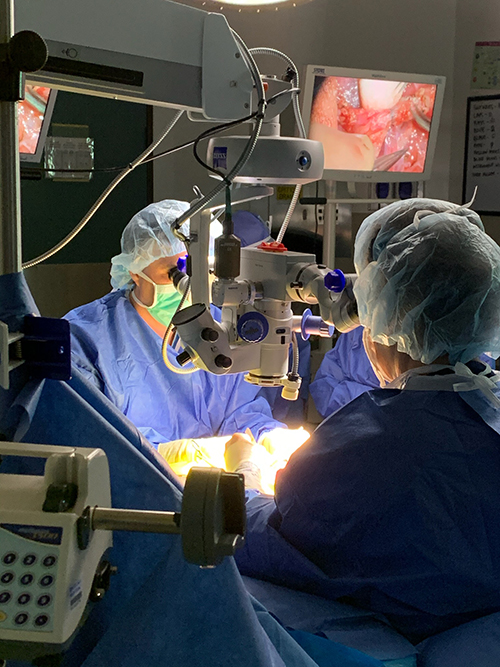 Microsurgical practice in urology is likely to expand, particularly with the growing use of the DaVinci surgical robot, which has to date been applied to vasectomy reversal and management of orchialgia, and enables a greater number of surgeons to perform delicate procedures. Technological advancements may allow for micromanipulation of sperm, whereby future urologists can selectively identify and remove only a few sperm at a time from a patient’s banked sample, greatly increasing the number of potential IVF cycles that can be undertaken with a single sperm harvest. High intraoperative magnification could be used to identify and harvest stem cells from the sub-basement membrane of azoospermic men.

Edited and condensed for this publication by John Phillips, MD