Charles Edward Hawtrey died peacefully and surrounded by family on Dec. 29, 2020. Born July 9, 1935, to the Rev. William and Ora Hawtrey, “Chuck” was the eldest of four brothers. Interviewed for the University of Iowa, Dr. Hawtrey said:

My parents were financially poor but intellectually rich and lovingly broad minded. My three brothers and I…were given interesting life commandments like: comparisons (about other people) are odious, education will provide liberation, and you can learn many things from employment and hard work. 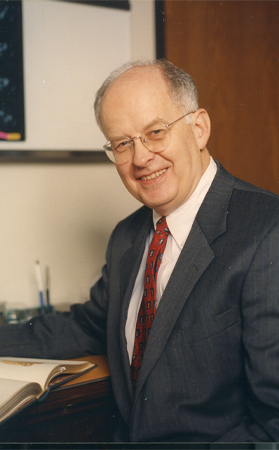 After graduating from Grinnell College in 1957, Chuck Hawtrey earned his medical degree from the University of Iowa.

During the Vietnam War, Dr. Hawtrey served for two years as a urologist at the Naval Hospital in Beaufort, S.C. Returning to Iowa City, he became a clinical professor of pediatric urology at the University of Iowa until his retirement in 2002 and professor emeritus until his death. Recognized as Iowa’s first pediatric urologist, Dr. Hawtrey improved the lives of thousands of children. His professional interests included research and writing. He served as secretary (1987-1989) and later president (1991-1992) of the North Central Section of the American Urological Association. In 1999, Dr. Hawtrey received the Distinguished Service Award from the American Urological Association for his monumental work in chairing the AUA Technology Committee and, in 2001, the Golden Cane Award for outstanding contributions to his profession and to the AUA.

Interested in history and genealogy, Dr. Hawtrey wrote a comprehensive book on the history of urology at the University of Iowa and donated two copies to the AUA Didusch Center for Urologic History. He served as Eucharistic minister to the homebound and enjoyed cycling, writing, woodworking, home improvement projects and lively discussions. In recent years, he was an active participant in a weightlifting group, where the median age was 87.