David McLeod was born March 20, 1935 in Fayetteville, North Carolina. His father was a general practitioner, and his mother taught English and Latin at the local high school. He thrived in the disciplined academic environment of Oak Ridge Military Academy and joined the Marine Corps after high school graduation. After serving as a small arms repairer/technician at Camp Lejeune, he worked as an armorer for a battalion in Camp Fuji, Japan. When his term of active duty ended, McLeod attended the University of North Carolina before becoming a medical intern at the Walter Reed Army Medical Center through the “Army Senior Student Program.” It was then he decided on his future in Urology. 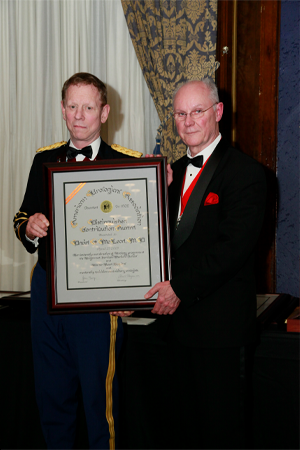 Married, with a daughter and a son on the way, Dr. McLeod arrived in Vietnam in 1966. Military medicine was changing rapidly with increasing air evacuation by UH-1 Iroquois “Huey” helicopters. Dr. McLeod became commanding officer of the Medical Company before returning to the U.S. and his family for a surgical residency at Fort Bragg, NC, followed by a urology residency at Walter Reed Army Medical Center.

In 1972, Dr. McLeod became Assistant Chief of Urology at the hospital in Fort Belvoir, VA, involving himself in all aspects of urology. He considered pediatric urology as a subspecialty, working with D.I Williams, Richard Turner-Warwick and John Blandy, before returning to pass his Urology Boards and settling into practice at Fort Belvoir. McLeod obtained his law degree, attending classes at weekends and at night, at the same time working to build the Center for Prostate Disease Research.

Dr. McLeod became Chief of Urology in 1984, was President of the American Foundation for Urologic Disease (now the Urology Care Foundation), President of the AUA Mid-Atlantic Section of the American Urological Association in 2001, and served on the Residency Review Committee in Urology for six years. Dr. McLeod received an AUA Presidential Citation in 1992 and Distinguished Contribution Award in 2009. He served on many AUA Committees and Panels, including Bylaws, Judicial & Ethics, Public Policy and Membership, among others.

Dr. McLeod was honored with many military awards and decorations. For more information on Dr. McLeod’s years of service to the military and urology, please see the Canadian Journal of Urology’s Legends in Urology article, written by Dr. McLeod himself. 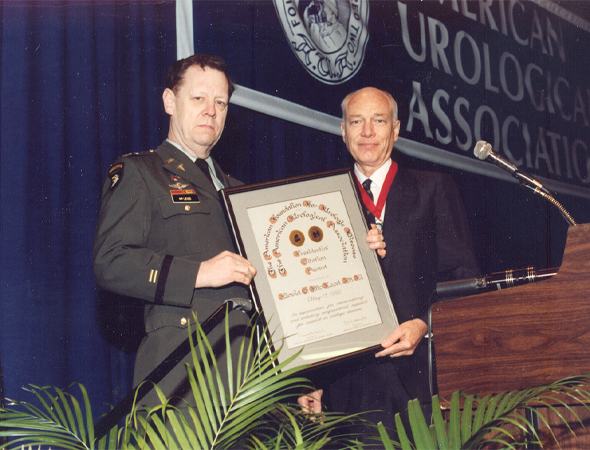 His friend, Major General (RET.) Elder Granger, M.D., wrote, "A Marine, a Soldier, a leader of leaders, a friend, a brother, and a mentor to many has gone home."

Albert Dobi, Ph.D., of the Center for Prostate Disease Research, wrote: COL McLeod transformed the entire military medicine and urology in a broader sense, I can say. From the Korean war and earning combat parachute badges in Vietnam, being the doctor of US Presidents, he had profound impact on the way our legislators think today on medicine.