A Truth Stranger Than Fiction: The Life and Times of Dr. George Emery Goodfellow (1855-1910), Part I

The sound of splintering wood as an errant bullet sailed past. The creak of saloon doors as they swung open. The thud of another victim falling prey to the town’s pastime as his body hit the dusty Arizona ground. While the scene seems suited for a Western movie shoot, it was this environment that shaped a frontier physician-scientist who made long-lasting contributions to trauma surgery, urology and anesthesiology. 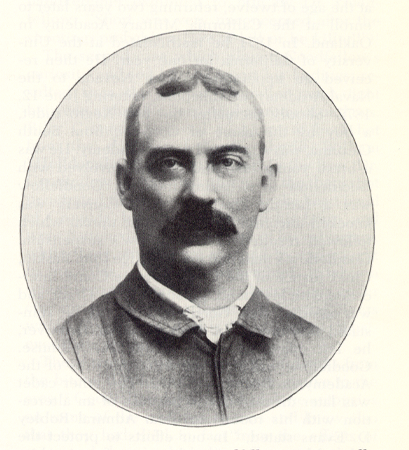 Dr. George Emery Goodfellow, who would come to be known as the “Gunfighter’s surgeon,” fully embodied what it meant to be a surgeon in the Wild Wild West. As was common for life in the frontier, improvisation was the theme of the day and, in that vein, Goodfellow challenged himself to perform previously unreported operative interventions in his efforts to save his patients. The Gunfighter’s surgeon also doubled as the coroner, using his gift for scientific inquiry in his post-mortem observations. His inquisitive nature also led him to reinvent a fundamental urologic procedure, the prostatectomy. No catalogue of the American Southwest would be complete without detailing his life and contributions. 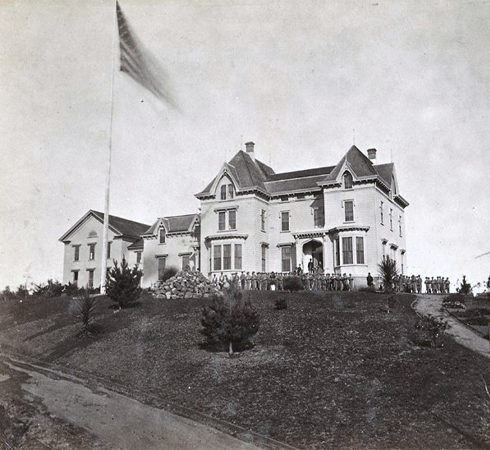 Goodfellow’s father cultivated his son’s love of adventure as his work as a mining engineer led him from mining town to mining town, so the family rarely settled in any one place for long. The most consistency George received was in his schooling, as he completed courses at the California Military Academy in Oakland and subsequently matriculated at the University of California with a program in engineering. His excellent performance earned him a coveted spot at the Naval Academy in Annapolis, Maryland. However, his promising military career was abruptly cut short when Goodfellow, at the time the school’s championship boxer, was expelled for participation in a hazing incident in which he knocked the school’s first African-American recruit, John Conyers, unconscious. An investigating board concluded that Conyer’s “persecutors are left then without any excuse or palliation except the inadmissible one of prejudice." Goodfellow and two other students were dismissed from the Academy in December 1872. Goodfellow’s uncle, the Chief Justice of the Supreme Court of Utah, tried to get his friend President U.S. Grant to reinstate his nephew, George, at the Naval Academy, but his request was forgotten in Grant’s reelection bid.

Instead of returning home to California, Goodfellow went to live with his cousin, Dr. T. H. Lashells, a physician living in Pennsylvania. There he realized his fondness for medical books and decided to pursue medicine, graduating from the University of Wooster, later known as the Cleveland Medical College, with honors in 1876.

Dr. Goodfellow initially attempted to practice medicine in a much more traditional fashion, opening his first practice in Oakland, California with his new bride in tow: Katherine Colt, the cousin of Samuel Colt, whose 45-caliber revolver would be the source for much of Goodfellow’s later surgical practice. However, his characteristic restlessness took hold, and Goodfellow relocated the family to more familiar territory, serving as chief surgeon for the mining company his father was working for in Prescott, Arizona.

When Dr. Goodfellow arrived in Tombstone Territory in Arizona in 1880, he was 25 years old and the town he would inhabit was several years his junior. Tombstone was then a mining town with a population of only 2000 individuals, yet it had already earned a reputation as “the condensation of wickedness.” The “wickedness” took the form of the outlaws, at the time derogatorily referred to as “Cowboys,” such as Curly Bill Brocius, John O’Rourke (alias Johnny-Behind-the-Deuce), Buckskin Frank Leslie, Johnny Ringo, Indian Charlie, and the lawmen charged with protecting the town such as Wyatt Earp and his four brothers. Goodfellow came to know them well during his time in Tombstone.

The frontier attitude seemed to have lured many other doctors; when Goodfellow arrived, there were already 11 doctors in town, although only 4 – including Goodfellow - had diplomas. Dr. Goodfellow “hung his shingle” in the midst of all the action, opening his practice right above the famous Crystal Palace Saloon, a site two blocks diagonal from the later shootout at the O.K. Corral. 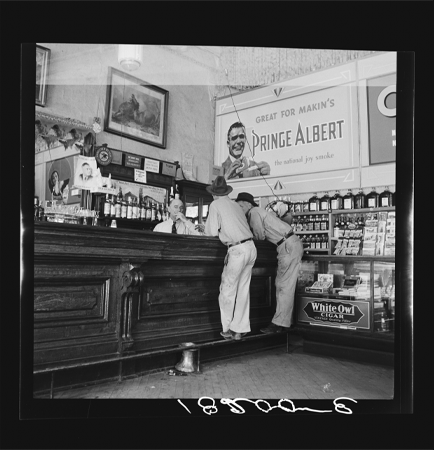 Inside the Crystal Palace Saloon, by Dorothea Lange, 1938, Library of Congress

Tombstone served as an ideal training ground for Goodfellow to develop his surgical skills while also allowing him to pursue hobbies and talents that he would find useful throughout his life: his love of geology, his mastery of the Spanish language, his locomotive and military experience. Over his 11 years there, Goodfellow not only contributed to Southwest lore but made long-lasting contributions to the field of trauma surgery and the scientific dialogue on the management of gunshot wounds.

“Too badly punctured to hold whiskey”

Notorious for its “shoot for the guts” approach to resolving disputes, the colorful activities of the Tombstone residents provided Goodfellow with ample opportunity to study the consequences of being one of the “festive or obstreperous citizens (who) delighted themselves with toys such as the 44 or 45-calibre Colt revolver and the 45-60 and 44-40 Winchester rifles and Carbines.”

Despite the chaotic surroundings, Dr. Goodfellow applied a systematic scientific rigor and logic to his patients and their presentations. Though exploratory laparotomy was coming more into practice, it was relied on primarily for tumors and obstruction rather than to manage the “gunshot wounds of civil life.” With his systematic approach, Goodfellow felt comfortable changing the paradigm for managing abdominal gunshot wounds and admonished his contemporaries for taking a more “laissez-faire approach.” At the time, the standard practice for gunshot wounds was to explore only the bullet tract with unclean fingers and instruments in an effort to locate and remove the bullet, albeit unsuccessfully. Goodfellow’s scientific articles on gunshot wound management made clear his feelings on the inaction of his colleagues and their default approach of waiting for their patients’ eventual deterioration: “a surgeon who delays longer than for necessary preparation is guilty of criminal neglect.”

As both surgeon and coroner, Goodfellow was able to confirm the effectiveness of his surgical technique and amend his own theories through post-mortem analysis. For example, the prevailing expectation that immediate hemorrhage was the main cause of sudden death after an abdominal gunshot wound was negated by his autopsy findings:

…in many of the autopsies made… I have frequently seen men shot in the abdomen, fall and die within fifteen or twenty minutes, opened the cavity expecting to find some large-sized vessels cut, and discovered nothing more than the free border of the intestines torn for a foot or so.

With observations based on real-world experience, Goodfellow was well aware of how his non-academic practice setting appeared to his contemporaries. However, he insisted that his own findings and subsequent techniques were just as valid.

While I have no experiments upon animals to record, the autopsies mentioned…have given me equally as good data upon which to base my assertions regarding the absolute necessity of immediate interference in cases of gunshot wound of the abdominal cavity.

Dr. Goodfellow’s post-mortem investigations led him to make another discovery with enduring implications for the field of defense regarding the “tenacity of silk fiber and its resistance to the penetrative power of the bullet.” Goodfellow presented his findings in an article in the Southern California Practitioner, talking the reader through his problem-solving process. In all three cases, Goodfellow marveled at the protective power imbued by the silk handkerchief worn by all of the victims. In the first two cases, the victims succumbed almost immediately to their mortal wounds, while their silk handkerchiefs were unscathed. Finding the handkerchief in the chest wound in the first case, Goodfellow initially assumed that the handkerchief was pushed into the chest in an effort to stop the bleeding. However, during the autopsy, he appreciated that a breast pocket handkerchief had been pulled into the gaping chest wound unperforated. Even more unbelievably, in the second case, buckshot penetrated the victim’s skull through a thick, silver embroidered hat, “while his silk handkerchief worn around his neck caught two buckshots and prevented direct contact with his skin.”

The sole survivor of the silk chronicles had his silk handkerchief tied loosely around his neck to thank for his survival as, in Goodfellow’s assessment: “had it not been dragged into the wound I doubt not that the great vessels of the right side would have been irreparably injured.” As he recovered, the survivor confided in Goodfellow that for two months after the injury any liquids he drank would pass through the wound. The inability to hold onto liquids was a common finding in Goodfellow’s work as a coroner; he reported that he found the body of a gambler named McIntire, shot in an argument over a card game, to be “rich in lead, but too badly punctured to hold whiskey.”

Goodfellow’s characteristic dark humor in detailing his autopsy findings was not indicative of a callousness towards his patients. Historians appreciated that “Dr. Goodfellow never asked questions, not even the name of the patient… His interest was solely in saving lives.” The focus on the life of the patient was evident in Goodfellow’s discussions of the treatment of the gunshot wound, wherein he castigated his colleagues for their inaction and unwillingness to be proactive about operative intervention, especially when it was the only life-saving option. Goodfellow also treated patients indiscriminately, rushing to save injured thieves as quickly as he did his fellow physicians. He also lent his surgical services for the care of Native Americans and Mexicans alike, which was uncommon at the time.

The end to Goodfellow’s time in Tombstone arrived in this most dramatic of fashions. When Dr. John C. Handy, then Surgeon of the Southern Pacific Railroad in Tucson, was shot by his wife’s lawyer, Francis J. Heney, he requested Goodfellow, who drove the train himself with the throttle wide open to the scene of the tragedy in an unsuccessful attempt to save his colleague. Goodfellow was named his colleague’s successor.

Join the William P. Didusch Center for Urologic History in April to read Part II of The Life and Times of Dr. George Emery Goodfellow 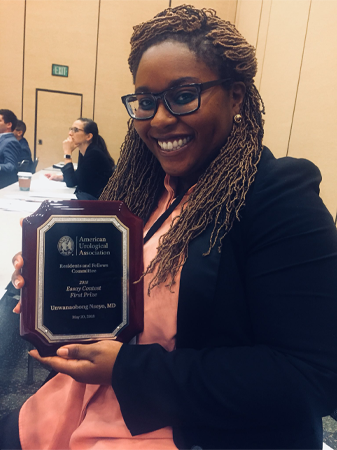