Edward J. McGuire, M.D., passed away peacefully at home in Florida on February 16, 2021, at 81 years of age. Ed was a world-renowned innovative surgeon who touched innumerable lives of patients, learners, and colleagues. He understood clinical problems from the deep complexity of the science behind them to the practical needs, co-morbidities, and social determinants of each patient he cared for – and he cared for each one well. Ed was a founder of a branch of urology once called female urology that is now described variously as neurourology and female pelvic medicine and reconstruction. 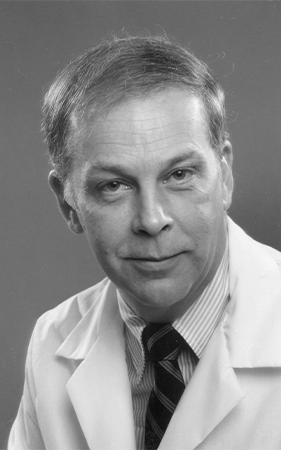 Ed was born in East Lansing, Michigan on February 11, 1940, to Tom and Helen McGuire. Tom was a professor of romance languages at Michigan State and Helen was a homemaker busy raising Ed and six siblings. Later in her life Helen became a social worker for Catholic Social Services in Lansing.

Ed McGuire graduated from Loyola University in New Orleans where he met and later married Susan Muse from Nashville, daughter of a urologist. Ed went on to Wayne State University Medical School, graduating with high distinction in 1965. He completed surgical internship at the University of Rochester Strong Memorial Hospital and was drafted into the United States Army in 1966, serving as a battalion surgeon in Vietnam for 13 months, earning the Bronze Star with Two Oak Leaf Clusters (indicating the Bronze Star was awarded three times) and Valor Device and the Army Commendation Medal with Oak leaf Cluster and Valor Device. Ed recalled his unit and fellow soldiers very fondly but was deeply disturbed by the horrors of war. During this time he decided to specialize in urology. After his tour in Vietnam, he returned to Fort Bragg where he oversaw the Emergency Room and made plans for an academic career in urology, although he continued service in the Army Reserves for many years, eventually retiring as Lt. Colonel. Ed dedicated one of his later books on neurogenic bladder to his Vietnam battalion soldiers, in addition to his three daughters, and noted that he found “the world turned upside down” on return to civilian life.

Ed was accepted for urologic training at Yale, under the tutelage of Professor Bernard Lytton, and had the good fortune of additional training as a fellow at The Royal London Hospital, England (1970-1971) mentored by Professor Sir John Blandy CBE, among other influential teachers. Ed then joined the urology faculty at Yale in 1972, establishing his name in worldwide urology with significant contributions to the field and making indelible impressions on cohorts of medical students and urology trainees. McGuire’s ideas generated innovations in patient care and new concepts that became explained in the best textbooks of the day and new terminology that entered medical dictionaries. He developed practical methods of video-urodynamic evaluation of neurogenic bladder and urethral dysfunction. His linkage of bladder pressures to upper urinary tract deterioration led to markedly improved outcomes for patients and he understood how to manage stress urinary incontinence through autologous pubovaginal sling or bulking agents that opened new options for women. In 1982 he received the Gold Cystoscope Award of the American Urological Association (AUA), an honor for the most promising young academic urologist of the year.

The University of Michigan (UM) enticed Ed McGuire back to his home state in 1983 as Head of the Section of Urology, then a part of the Medical School Surgery Department. As successor to the renowned Jack Lapides, Ed expanded the UM urology section, growing its faculty with external hires and developing subspecialty expertise among the UM urology graduates. His clinical skills brought a surge of new patients to Ann Arbor from the region and the nation. Continuing work he had initiated in New Haven in Ann Arbor, Ed’s basic and clinical research furthered the contemporary understanding of the interplay of bladder and kidney function, urinary incontinence, and neurologic bladder dysfunction.

Academic medicine was his love and his life. Ed inspired medical students and nurses, attracted talented residency trainees, and began fellowship programs and collaborations in pediatric urology as well as neurourology and reconstructive pelvic surgery. Ed brought trainees and colleagues to Ann Arbor from Australia, Brazil, Canada, Egypt, Denmark, England, Germany, Greece, Ireland, Japan, Netherlands, New Zealand, South Korea, Venezuela, and many other places. As a popular invited visiting professor, Ed taught his skills in operating rooms, lecture halls, and bedside instruction around the world. One of his many great fellows recalled:

Perhaps because of his military training, Dr. McGuire has tended to have an ‘us vs. the disease’ attitude. As a trainee with him, you were always made to feel like you were on his side fighting in the clinical trenches … that’s one reason he has been such a great mentor and why he has inspired so much loyalty from his trainees. [Quentin Clemens]

Ed believed in diversity and inclusion in the medical work force and built pipelines to urology locally and internationally. He was an early pioneer in bringing women into urology, and many have become leaders in urology across the globe. Ed led urologic surgical missions to Haiti and hosted numerous international fellows that broadened the global outreach of Michigan Urology. In the same international spirit, he sent many of his trainees and colleagues abroad for international educational experiences.

The transition of the urology unit at the University of Michigan Medical School from sectional status to independence as a free-standing department seemed to stall and in 1992 Ed abruptly left Ann Arbor for the University of Texas in Houston to join his friend Joe Corriere where Ed continued to educate students, residents, and fellows in addition to conducting his busy clinical practice as Head of Urology. Meanwhile, back in Ann Arbor a chain of events was set in motion creating a path to departmental status under James Montie and in 1999 Ed returned home again, this time as Professor of Urology at UM and the Ann Arbor Veterans Hospital, restoring his skills and expertise (and his war stories) to trainees and patients, especially the veterans at the VA. In 2003 the AUA gave Ed the Hugh Hampton Young Award and in 2010 the Lifetime Achievement Award. In 2007 McGuire was named Reed M. Nesbit Professor at UM, a fitting endowed professorship attached to the name of the first Section Head of Urology at UM (1930-1968). In 2013 Ed retired from UM and the Veterans Hospital and became Professor Emeritus.

Dr. McGuire was a founding member and former president of the Urodynamics Society (now known as SUFU), an associate editor of The Journal of Urology and the Journal of Pelvic Surgery. He served as feature editor of the Journal of Neurourology and Urodynamics. Ed was a member of the AUA, the American Association of Genito-Urinary Surgeons, the Clinical Society of Genito-Urinary Surgeons, and the Society of Gynecologic Surgeons, among other organizations. For decades he remained a consultant for the Veterans Administration in Washington DC, providing expertise on spinal cord injuries. His body of work in medical journals and books is extraordinary and remains frequently cited.

Ed’s career was distinguished and fulfilling. His state-of-the-art surgical expertise benefited innumerable patients, with problems mundane or complex, from Vietnam to Ann Arbor to Innsbruck among many other places. Ed related well to trainees as well as patients. Students, residents, and fellows fondly remember rounding with him in hospitals - conversations peppered with Vietnam memories, basic science insights, and practical advice. He loved teaching and would host retreats for the residents at his lake house - a highlight of his years at UM. Ed was a superb role model as clinician and academic professor. Just as the patients whose lives he influenced is beyond measure, the count of learners and colleagues affected around the world by Ed McGuire is similarly innumerable.

An avid reader, Ed’s broad sense of humanity and decency expanded throughout his life. He loved the outdoors - hunting, fishing, boating, and riding his ATV with family and friends. Ed and his present wife Susan enjoyed golf, travel, and most especially spending time with their children and families.

Donations may be directed to the McGuire Research and Education Fund at the University of Michigan Medical School, Department of Urology.