The Shot Fired in Buffalo

The 1901 Pan American Exposition in Buffalo, New York, was the site of another event in medical history: the assassination of United States President William McKinley.

William McKinley, Jr. was born on January 29, 1843 in Niles, Ohio, the seventh of nine children. Described as a delicate child who liked school, he was a keenly observant and studious young man. Religious, intelligent, and diligent as he was, his mother hoped he would become a Methodist minister. At 17 he entered Allegany College but withdrew when he became ill. By the time he had recuperated, the family’s finances were depleted and he was unable to return to college. Until the outbreak of the Civil War, he taught school and worked as a clerk for the Postal Service. His family’s abolitionist sympathies and the attraction, excitement, and glamour of the war moved him to volunteer for the 23rd Ohio Infantry Regiment. Rutherford B. Hayes, under whom he served, called him “one of the bravest and finest officers in the army.” After the war, McKinley studied law, was admitted to the Ohio Bar, and was accepted as a partner by an elderly judge who subsequently left him the practice.

By 1876 McKinley had been elected to Congress and moved his family to Washington. Rutherford Hayes, McKinley’s commanding officer during the war, was now President. Hayes introduced McKinley into the political elite to whom he soon became known for his superb discussions and disputes. After serving as Ohio’s Governor, McKinley became a front-runner for the Republican presidential nomination in 1896. His campaign for President was financed by his friend Mark Hanna, who spent millions of dollars on pamphlets, posters, buttons, and paid train fare for many state delegations to go and meet McKinley in Canton, Ohio.

McKinley won the presidency in November. 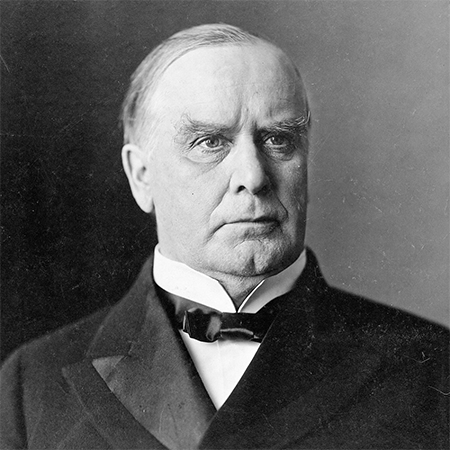 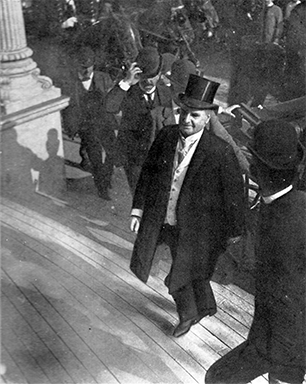 One of the last photographs of the late President McKinley ascending the steps of the Temple of Music, site of the assassination, September 6, 1901. Andrews, E. Benjamin. History of the United States, volume V. Charles Scribner's Sons, New York. 1912, p. 363 (Wikimedia)

In September of 1901, Buffalo, New York hosted the Pan American Exposition. On Sept. 6, 1901, McKinley held a public reception in the Temple of Music on the exhibition grounds. While shaking hands with a long line of people, McKinley was approached by a man with a bandaged left hand. Leon Czologsz, who carried a gun in this wrapped hand, stepped in front of McKinley and shot him twice. The first bullet grazed his shoulder, but the second passed through his stomach, pancreas and kidney before lodging in his back muscles. 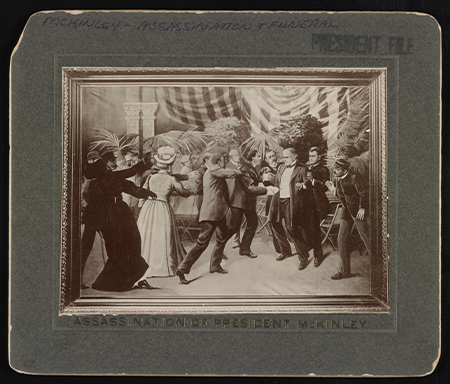 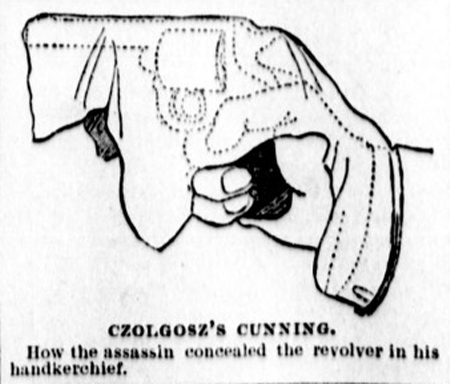 President McKinley was transferred to the Exposition’s hospital facility, which had no electricity and limited surgical tools. One bullet fell out of the president’s clothes when they were removed, but the other bullet could not be found. Surgery was necessary. Dr. G. McKay Hall cleaned and temporarily dressed the wound, and medical student Edward C. Mann administered morphine and strychnine hypodermically. A larger surgical team was called that included Matthew D. Mann, Herman Mynter, and Eugene Wasden of the United States Marine Hospital Service. Noted surgeon Roswell Park was summoned, but because he was in the middle of an operation in Niagara Falls, he would not arrive until sometime later – when McKinley’s surgery was near completion.

The surgeons (who were not trained to treat trauma cases and who did not bother to disinfect their hands or instruments) explored McKinley’s abdomen for the bullet. In a strange irony, Wilhelm Roentgen’s x-ray machine was being displayed at the Exposition, not far from the medical area, but it was not used on the President to locate the bullet.

Unable to locate and remove the projectile, the surgical team cleaned and oversewed an anterior entry wound and posterior wound in the stomach. McKinley’s left kidney was also damaged in the upper pole. However, there was no fluid accumulation, so the physicians decided not to place a drain, though Mynter advocated for a Mikulicz drain behind the stomach wall. It is said that this lack of drainage may have contributed significantly to the President’s failure to recover. 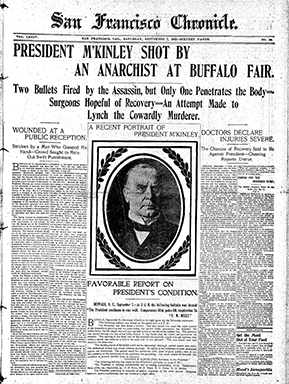 Over the next few days, McKinley’s status waxed and waned, and he received little oral fluid. Twenty-four hours following surgery, McKinley had passed only 370cc of urine, a small amount.

Shortly after the president died on Sept. 14 at 2:15 am, an autopsy was performed, but the physician was hampered, not being allowed to take the time or tissue necessary to complete his examination. The autopsy showed that the repair of the stomach was intact but that there were some peritoneal adhesions. The official cause of death listed by U.S. Navy Medical Inspector P.M. Rixey was “Gangrene of both walls of stomach and pancreas following gunshot wound,” though McKinley likely died of fulminant pancreatitis due to pancreatic injury.

The media perpetuated hysteria that McKinley had been treated inadequately. A report released on October 12, 1901, and signed by each of the involved physicians noted that “the absence of known pathogenic bacteria, particularly in the necrotic cavity, warrants the conclusion that bacterial infection was not a factor in the production of the conditions found at the autopsy.”