From man’s earliest observations of electrical phenomena, more than four millennia ago, to Galvani’s momentous accident, the intimate relationship between electricity and physiology lay just beyond our grasp. In the 18th and early 19th centuries, as the fundamentals of electricity began to reveal themselves in the workshops and laboratories of experimenters -- and in the minds of mathematicians and natural philosophers - the medical implications of the new science were never far from pioneering imaginations. Just what role electricity would play in the medical revolution to come was yet unknown.

Researchers were fascinated with electricity and worked to harness this new power for good, as well as profit. Many inventions came and went; some proved useful and others, mere quackery. Several pioneers stand out as having developed applications for electricity that are now integral to everyday clinical practice. Their inventions help us to visualize, diagnose and treat patients in ways that were not possible 150 years ago.

Much of what we now know about the function of the muscles in the human body is based on the discoveries by French neurologist Guillaume Benjamin Armand Duchenne (1806-1874). Drawing on Galvani’s discovery that electric charges can cause muscle movement, Duchenne found that, when electric current was applied to a patient’s skin, muscles contracted. He developed and used an induction coil to apply electricity to muscles to help diagnose a patient’s problems, later expanding the device for therapeutic use. His studies helped him to map out muscle function and he later realized that for significant movements, such as smiling, multiple muscles might need to contract. In patients with nerve injuries, he used electricity to force a muscle to contract. As long as there was still some electrical contractility remaining in the muscle itself, he could assume that the patient’s recovery would be quick; if there were no contractions, the patient would recover slowly, if at all. 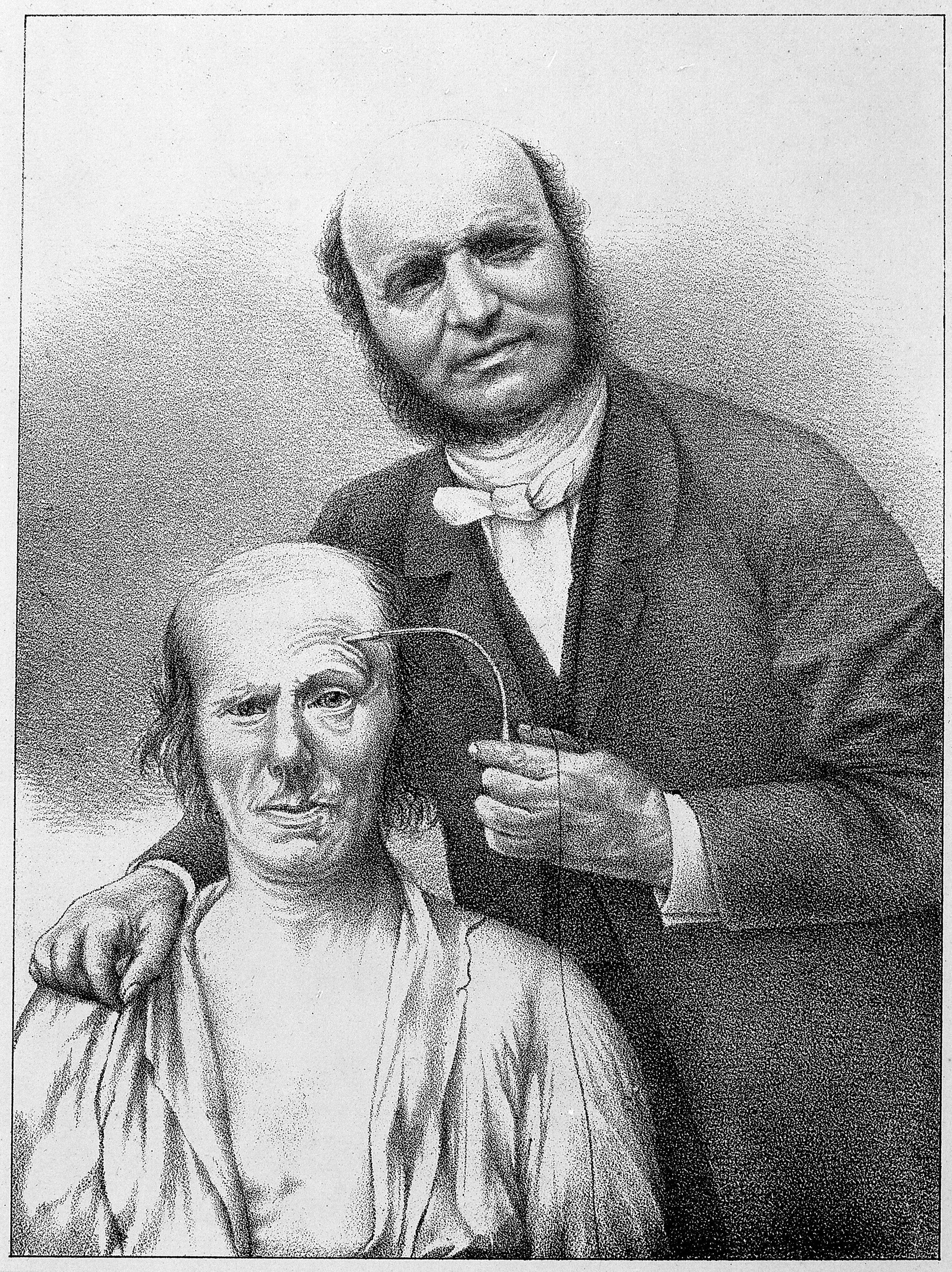 Duchenne is also credited as the first to use an “artificial pacemaker” after he used an electrical current to induce electrophrenic stimulation in the resuscitation of a drowned girl. The development of the pacemaker eventually led to other inventions to stimulate muscles and solve physical ailments. For instance, in urology, we now use biofeedback to improve bladder function by electrically stimulating pelvic floor muscles to produce contractions, which give the patient the example of the proper contraction sensation so that he or she can work on producing contractions regularly to strengthen pelvic muscles.

The use of heat to control bleeding and seal blood vessels dates back to ancient times. Though hot-iron cautery was replaced by ligatures in the 1500s and then languished for centuries, Jacques–Arsene D’Arsonval (1851-1940) helped reinvigorate interest in the procedure. D’Arsonval discovered that high-alternating current could be applied to tissues to control bleeding without affecting sensory nerves or producing muscular contractions. By the early 20th century, the technology was being used to destroy skin lesions. Others, including Doyen, W.L. Clark and Lee DeForest would make improvements to D’Arsonval’s device, ultimately leading to what we now call electrosurgery. By 1910, these electro-cauterization units were being used to treat not only skin lesions, but also bladder tumors and hemorrhoids. 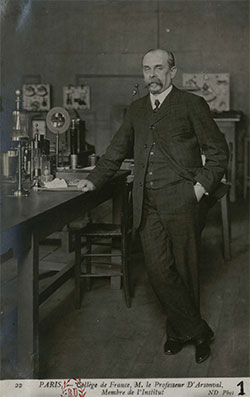 During this period, surgeons were also making significant advancements in sanitization, including Enrico Bottini (1835-1903), a physician in Pavia, Italy. Having shown the importance of destroying micro-organisms in infected wounds -- which he called “microphytes” -- Bottini described his use of carbolic acid to achieve a cleaner surgical field as early as 1866. Bottini had a keen interest in the field of urology and devoted himself wholeheartedly to this specialty. In 1900, he presented the results of his experience with an instrument he had first designed in 1874 in a treatise called On Prostate Ischuria. His “thermo-galvanic incisor of the prostate” was the first such incisor to allow to electrically cauterize an incision. This new technique, wherein the heated incisor simultaneously cut and cauterized incisions while destroying micro-organisms, reduced the risk of infection and scar tissue buildup in the incision, a potential cause of discomfort and urination complications. Bottini’s incisor was later improved upon by Freudenberg.

In the United States, as early as 1892, William Niles Wishard of Indianapolis (1851-1941) had picked up on Bottini’s idea and designed an instrument that was introduced through a perineal incision into the urethra. Wishard became the first to perform an incision of the prostate under direct vision—a major feat. Wishard went on to become the second president of the American Urological Association in 1904. 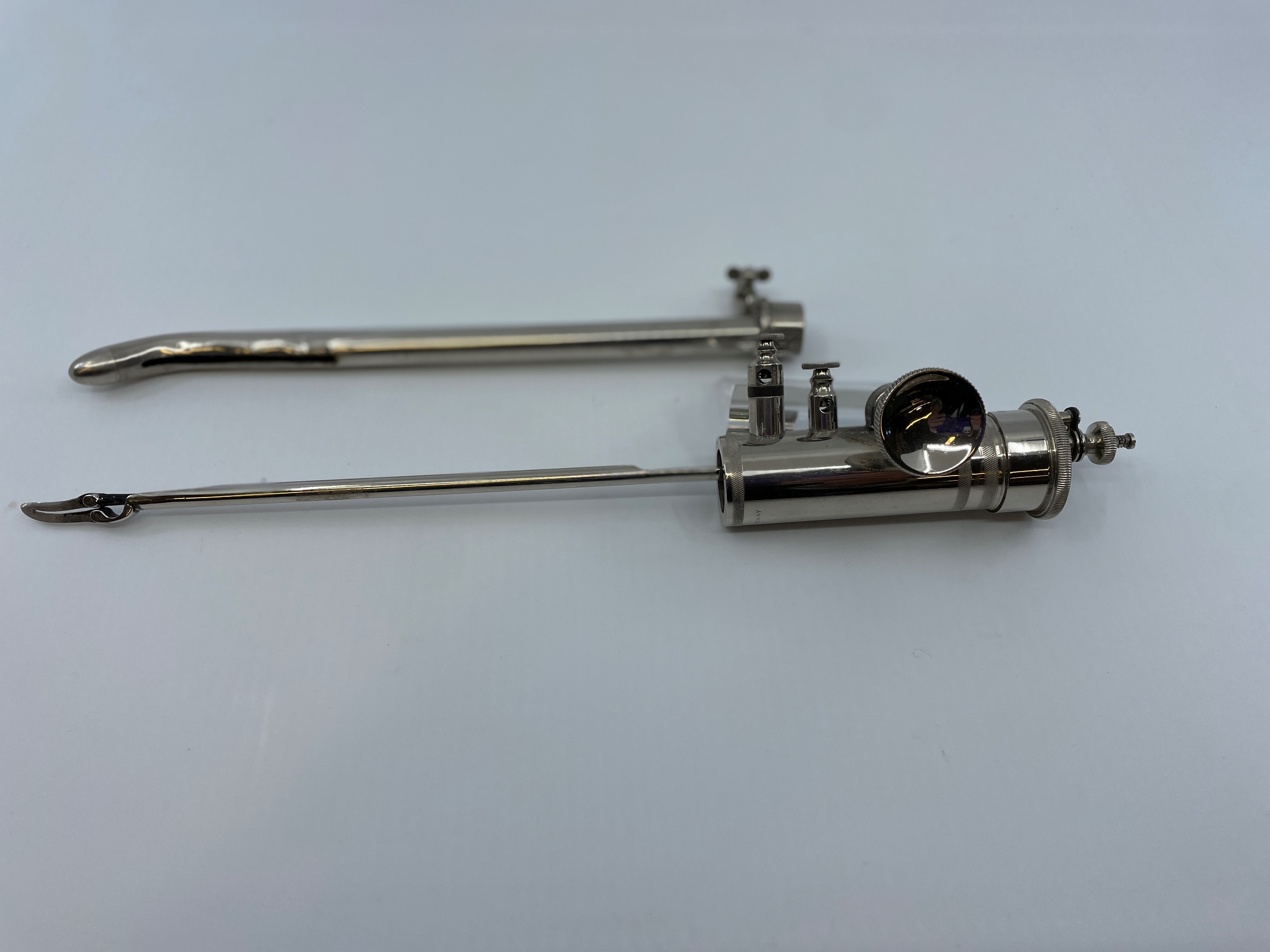 Shortly afterwards, Charles Chetwood (1869-1954), in New York, created an instrument that was also introduced through a perineal urethrotomy; however, it did not allow for direct observation. These instruments are the contemporaries of the Collins knife, a long blade that is still used today during a transurethral incision of the prostate (TUIP).

A ground-breaking development for urology was the invention of the cystoscope by Maximilian Nitze (1848-1906). Prior to Nitze’s invention, the only instruments to look into the bladder were woefully inadequate. The Lichtleiter, created by Philipp Bozzini in 1806, used a candle as a light source and had no lens system. Designs by others did not do much better, though short hollow tubes – such as Howard A. Kelly’s instrument – provided adequate visualization of the female bladder.

Paving the way for endoscopy and laparoscopy, the cystoscope was one of the earliest instruments to let us look into the human body. Nitze’s 1877 invention combined an instrument with a water-cooled electric platinum filament lamp at the tip of the instrument and a lens system to allow a clear view of the inside of the organ— the first cystoscope. Initial designs were hampered by a rather cumbersome cooling system that was necessary for the platinum wire in the tip of the instrument. But, in 1888, when he eventually allowed his instrument to be fitted with the miniaturized electric bulb (the mignon bulb developed by Koch and Preston in Rochester, NY), Nitze’s instrument became widely used and accepted. 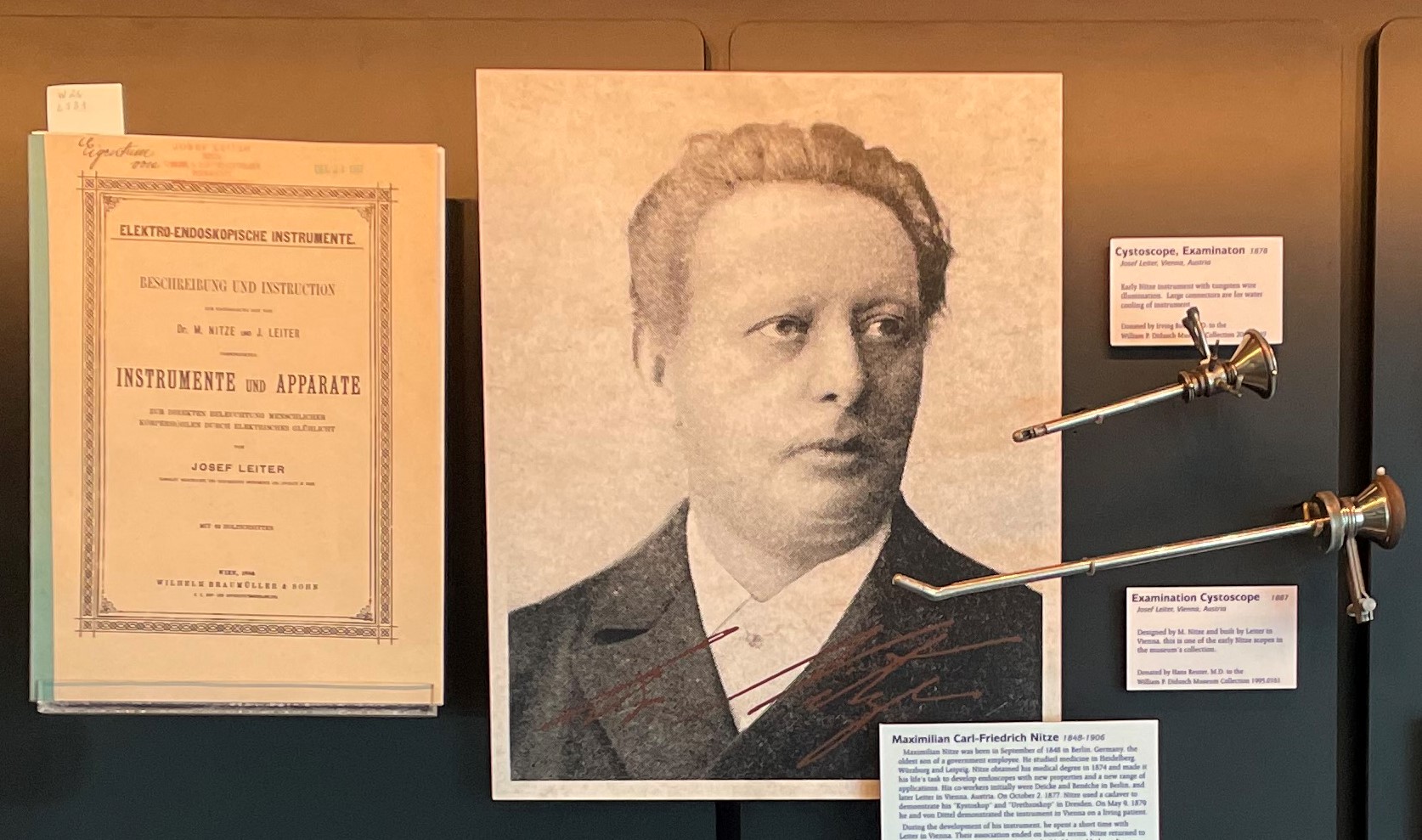 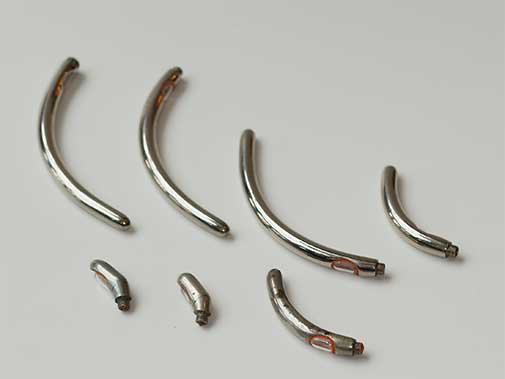 The new light source afforded not only a better field of vision but also made the cooling system unnecessary.

Nitze recognized the value of being able to diagnose intravesical and intraurethral diseases with the cystoscope, and in 1895 also designed an operating instrument with cutting knives and loops that could remove tumors and cauterize the tumor bed. His cystoscope has been modified and improved; today we use a light source that is outside the human body with both light and image transmitted through fiber-optic bundles. The cystoscope fathered several great endoscopic instruments, which led in turn to a vast array of specialized instruments that allow us to operate inside of the living human body.

The fascination with peering inside the body continued as physicists and mathematicians studied electricity and electromagnetism. In the late 19th century, notable researchers such as Johann Hittorf and William Crookes investigated the effects of energy discharges. Heinrich Hertz demonstrated that cathode rays could penetrate thin metals and Tesla discovered a process to produce electromagnetic radiation. However, it would be German physicist Wilhelm Conrad Roentgen (1845-1923) whose name would be forever attached to imaging. In 1894 – through experiments with vacuum tube equipment developed by Hittorf, Crookes, Hertz, Tesla and Philipp von Lenard – Roentgen began to observe and document X-rays. Roentgen found that invisible cathode rays could penetrate many substances, including soft tissue, to varying degrees. The first X-ray image ever published, taken Dec. 22, 1895, was of his wife’s left hand, clearly showing the bones of her hand and her wedding ring. He immediately wrote a preliminary report “On a New Kind of Ray: a Preliminary Communication,” which he submitted to the Physical-Medical Society Journal of Würzburg on December 28, 1895. In this paper he first used the term “X-ray,” which has been used ever since. 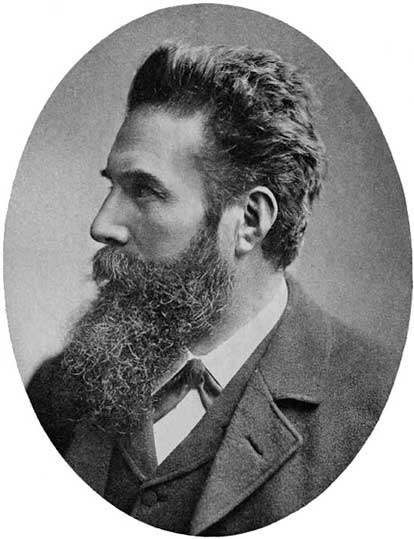 Thomas Edison is credited with designing and producing the first commercially available fluoroscope, a machine that uses X-rays to take radiographs. Roentgen’s images were very faint; Edison discovered that calcium tungstate fluoroscopy screens produced brighter images than the barium platinocyanide used by Roentgen. Many will remember the fluoroscopes used in shoe stores that allowed you to see the bones of your feet and toes wiggling. 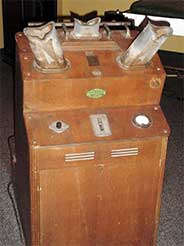 Early X-ray photography systems were relatively inefficient; because much of the radiation was absorbed by the body, high radiation levels were required to achieve a clear image. Photographic plates were initially used to produce the images; eventually film replaced these plates and today we use digital systems in place of film, though film technology remains in use in industrial radiography.