The Center for Urologic History is named in honor of William P. Didusch, scion of a family of artists in Baltimore and one of the first pupils of the renowned Max Brödel, first director of the Department of Art as Applied to Medicine at the Johns Hopkins School of Medicine, which opened in 1911.

Didusch became the primary illustrator for the Brady Urological Institute of Johns Hopkins Hospital, opened in 1915 by Dr. Hugh Hampton Young. Dr. Young, the “Father of American Urology” was also founder of The Journal of Urology® in 1917, and professor and director of urology at Johns Hopkins from 1914 to 1941.

The center has a rich and varied collection of illustrations, photographs and instruments of historical importance to urology. This text is designed to help you as your navigate your way through the various displays at the American Urological Association’s headquarters building.

Development of the Cystoscope

The cystoscope is the instrument that best represents the specialty of urology. The first exhibit cases highlight the cystoscope, beginning with the Bozzini Lichtleiter, a facsimile of which is on display. Philip Bozzini, a military surgeon, wanted to develop an instrument that would allow him to look into the cavities of the human body including, he hoped, the wounds of soldiers injured in battle. His Lichtleiter used various attachments to spread the vagina and urethral openings, allowing light from a candle to illuminate the interior. Although the instrument was not terribly successful due to its bulk and the deficiencies of candle light for illumination, its invention sparked interest and modifications by future urologists. 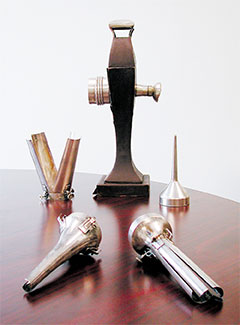 Maximilian Nitze, in the late 1800s, made it his life’s work to develop endoscopes with new properties and applications. The William P. Didusch Center for Urologic History has one of only two original fully operating Nitze cystoscopes left in the world.

Other physicians who made important contributions to the development of the cystoscope are profiled in this exhibit, as are the manufacturers who worked with the physicians to turn their ideas into working instruments. In addition, note the contributions of Thomas Edison and his lightbulb, H.H. Hopkins’ lens system, and the modern fiberoptic systems that made possible today’s cystoscopes as shown further down the wall.

Development of the Resectoscope

This display highlights the history of transurethral treatment of bladder neck and prostatic obstruction of the urinary flow. Leaders in urology developed and modified instruments in the attempt to create the most effective and safe method to remedy such obstructions and patient discomfort. Notice the Hugh Young Punch used to operate on James Buchanan “Diamond Jim” Brady. Brady was so grateful to Dr. Young that he donated the funds to establish the Brady Urological Institute at Johns Hopkins. 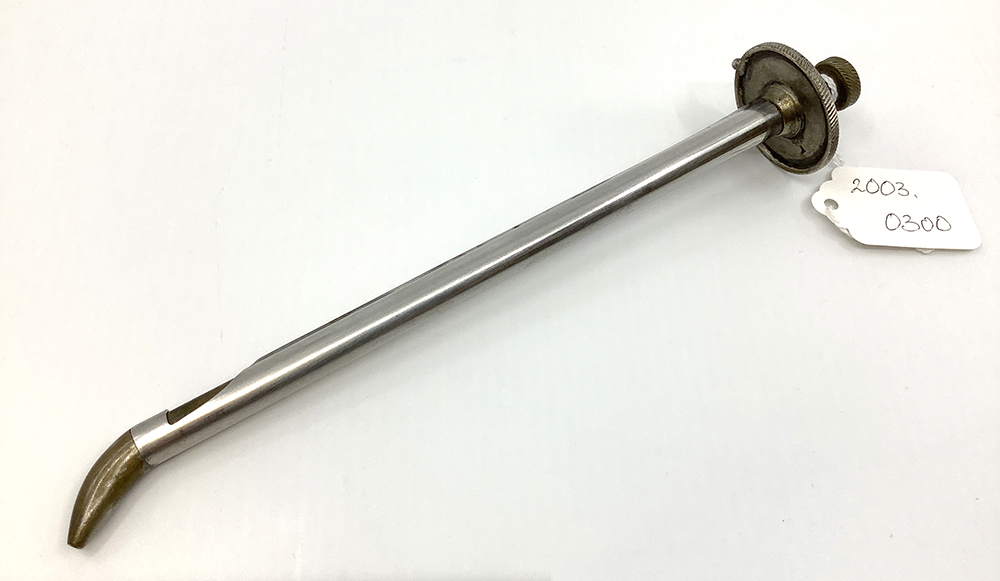 See items likely to be found in a urologist’s office in the early 1900s. Notice the portrait of T.M. Davis, originally an electrical engineer, who modified the early Stern Resectoscope and invented the Davis-Bovie Generator displayed in the cubby. By using thicker wire and improving the junction of the tungsten loop to the shaft, Davis decreased loop breakage in the Stern Resectoscope and fixed a problem causing previous loops to short out.

Bleeding problems that Davis encountered using the resectoscope convinced him to combine a high-frequency cutting current and a low-frequency coagulating current into one machine with a “double-throw foot switch” that he made in his home workshop. Today’s resectoscopes still use such a double foot switch.

Davis’ first electrosurgical unit was produced by Liebel with the engineer Bovie from Boston. This machine was the father of the Bovie electro-surgical units used into the 1980s. 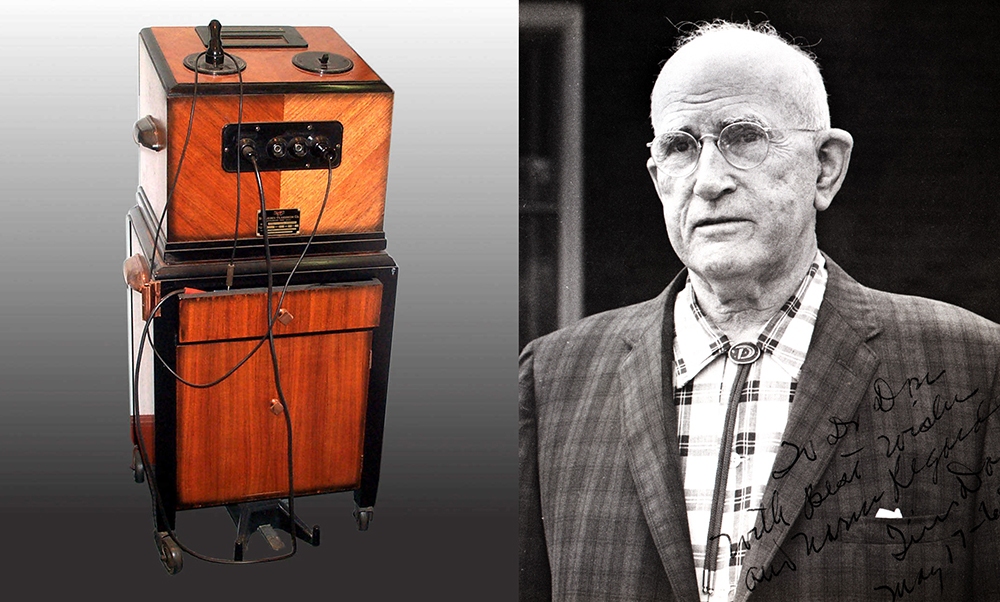 History of the Catheter

The early 1900s walking cane and umbrella in the middle of this case each contain a catheter and lubrication for a gentleman to self-catheterize when suffering from bladder outlet obstruction of the urinary flow. Notice also the model of Ben Franklin’s catheter that he had made for his brother who suffered urinary retention due to bladder stones.

History of the AUA

In 1900, a group of New York surgeons with special interest in the genito-urinary system organized themselves as the New York Genito-Urinary Society. On February 22, 1902, eight members of that society met for dinner in the home of Dr. Ramon Guiteras and voted to disband the society and officially form the American Urological Association. At that time, the AUA consisted mostly of New Yorkers, but within a year, its membership included doctors from around the country including the West Coast. The association was open to all surgeons, including obstetrician-gynecologists and genito-urinary specialists. In the early years, its geography encompassed South America and the West Indies. At annual meetings, papers could be read in any modern language, but they were to be published in English and Spanish.

The AUA did not always have its central office in Baltimore nor was that location given much consideration when the association first looked for its home office. The first official AUA records were kept by the first AUA secretary, Dr. Ferdinand C. Valentine, New York City, in his professional office. AUA files were transferred to each succeeding AUA secretary's office. Until the mid-1940's, the AUA secretary's office was considered the main AUA office.

By 1948, urology was well recognized as a special area of medicine and surgery, and the numbers of urologists were increasing. The AUA was growing; there were now 1,290 members; however, it still served as a scientific and social organization.

In June 1952, the position of AUA executive secretary was created and Mr. William P. Didusch, the association's director of conventions and art editor for The Journal of Urology®, was officially hired for that position. In August 1952 the AUA officially settled in space at 1120 North Charles Street, Baltimore, rented from the Hugh Young estate.

One important factor about the AUA in the early years was that it was not incorporated nor was it considered by the government as a non-profit organization. The AUA existed as a scientific and social organization. Several times, the executive committee discussed incorporation, but decided against it until the 1950s when the government began to investigate medical societies, especially those with journals. In 1958, the AUA was formally incorporated as a 501(c)(3) not-for-profit entity. Each of the (now eight) sections was also incorporated as separate corporations.

This exhibit features Dr. Rainer Engel, curator of the museum for almost 20 years, who collected the most interesting urologic items he could find. Note the incontinence device to be worn on a leather belt under loose clothing – the flask could be unscrewed and emptied as needed. Also in this case be sure to see the “Anti-masturbation Ring,” sold in Sears Catalogs in the 1900s for parents to put on their boys before bed to prevent nocturnal erections.

Like all branches of medicine, urology’s history is not without its own share of quackery, from traveling lithotomists of the Middle Ages (though some were quite adept) to promises of increased virility or cures for every kidney or liver ailment. The genitourinary system – essential to life with the production of urine as well as male reproduction and fertility – has been and always will be a target for quackery. Notable items in this display include the Heidelberg Belt, produced using voltaic batteries disks throughout the belt, and touted to quickly cure “all nervous and organic disorders arising from any cause whatever,” though the metal pieces woven through the back of the belt were unlikely to produce anything more than a slight tingling sensation. Marie Curie’s discovery of radium inspired a host of radium cures, while Nikolai Tesla’s high voltage current led to Violet Ray medical instruments. 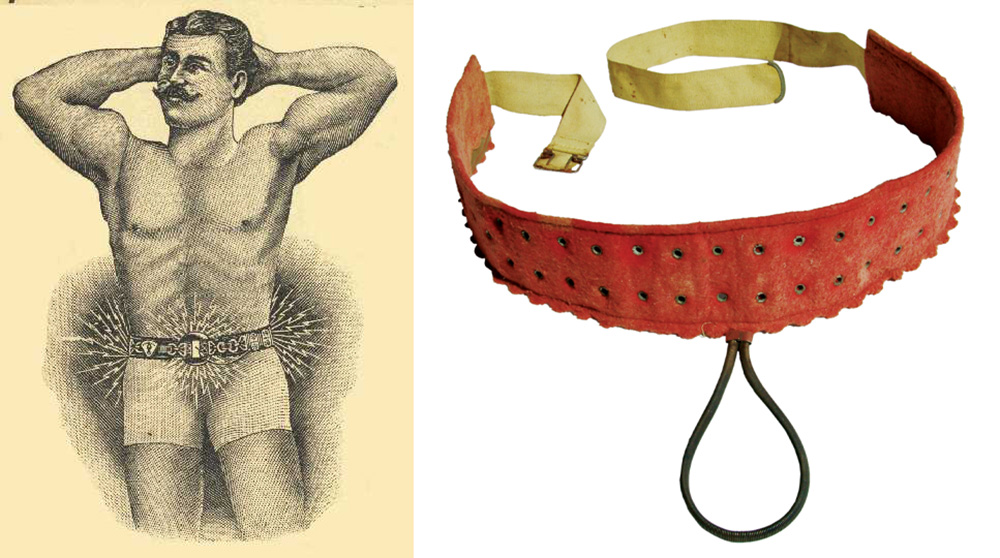 On the walls of the AUA first floor Conference room is a collection of more than 30 microscopes dating back as far as the 18th century. This display includes Martin’s Compound Microscope from 1776 and a wooden microscope from 1730. This amazing collection is on long-term loan from a German urologist, Hans Reuter.

The cystoscopy table was designed and built by Hugh Hampton Young in his workshop in the basement of the Brady Urological Institute of Johns Hopkins Hospital. 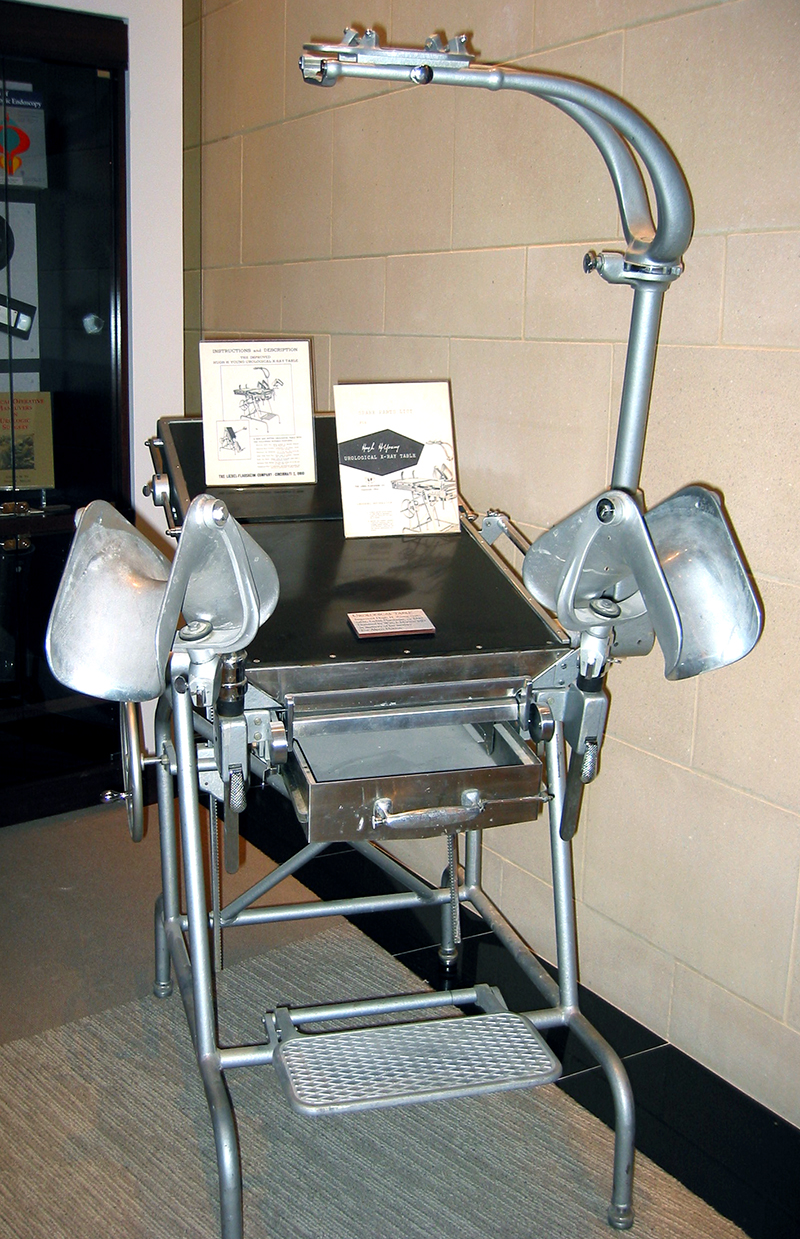 The History of Stone Surgery includes graphic drawings and an example of Civiale’s Lithontripteur, showing the early methods of removing stones from the bladder (pre-anesthesia). Subsequent instruments include the Bigelow improved Lithotrite with a sliding blade to crush the stone and a special metal catheter to remove fragments. But even Bigelow’s improvement occasionally required tapping on the lithotrite with a hammer to fragment a stubborn stone. 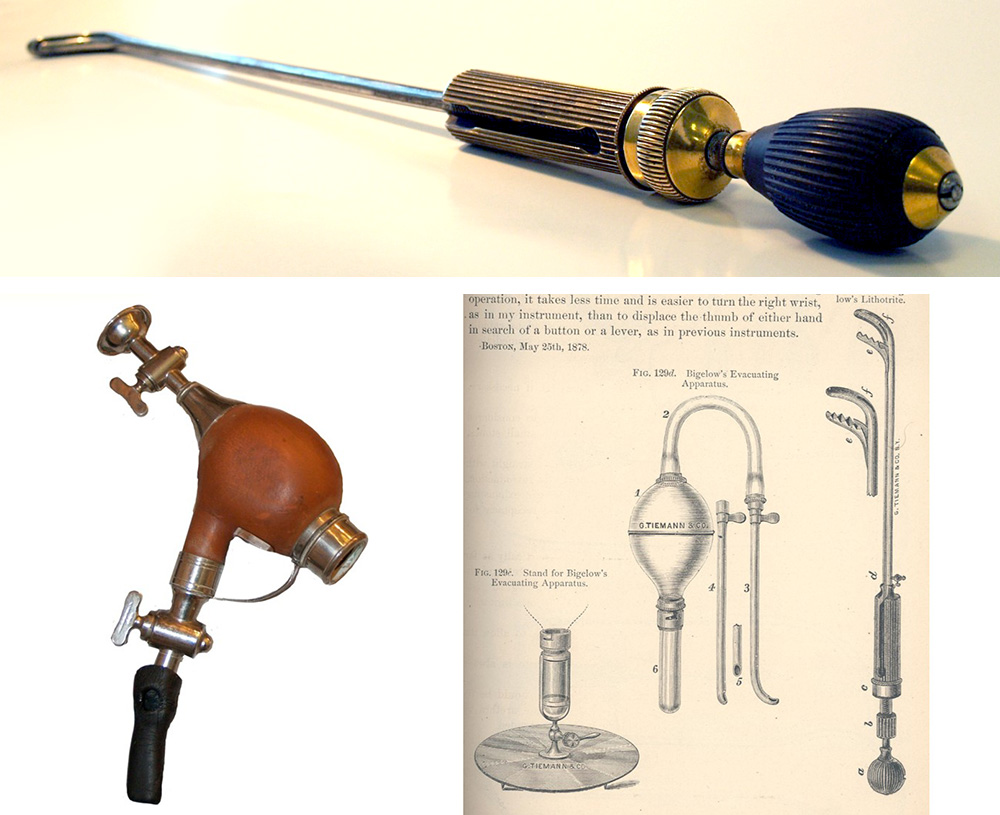 Breathe a sigh of relief as you see the introduction of ether anesthesia and such modern developments as ultrasound, electrohydraulic, and laser lithotripsy in the treatment of stones. But don’t miss the huge staghorn calculus (stone) on display; it is as big as your fist and involved major surgery. In the hallway you can marvel at the 10-pound stone on display and a smaller stone with a thermometer right through the middle.

Examine the evolution of medical illustration from early medieval medical texts to the creation of the Department of Art as Applied to Medicine at Johns Hopkins and on to actual photographs of the bladder and kidneys taken using endoscopes. Be sure to note Bill Didusch’s medical illustrations which appeared in numerous textbooks written by Hopkins physicians. The William P. Didusch Center for Urologic History owns hundreds of original Didusch drawings, and the curator is contacted regularly by physicians for permission to use his drawings in their own work.

Note also the varied and detailed original urologic prints in frames on the walls above the exhibits. Many of these date back to the late 1700s. 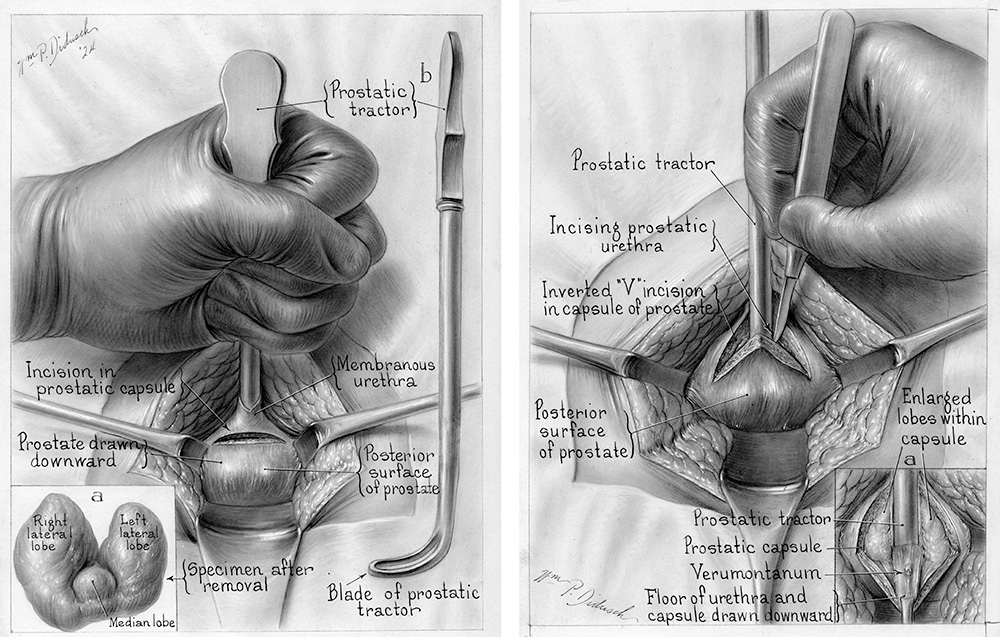 Laparoscopy, or "belly button surgery,” was first tried in the early 1900s and used initially by gynecologists and then by gastroenterologists. Urologists took a long time to embrace this new approach to surgery. Today, it is part of the training of every urologist and is beginning to compete with most open surgery; though it takes longer, requires expensive instrument and special skills, patients request it because it leaves no large scar, recovery is faster, and pain after surgery is reduced.

The operation requires insertion of a sharp, pointy instrument called the trocar through the wall of the abdomen in several (commonly 4) different places. The abdomen is then distended with CO2, and a lens system is placed through one "port" or entry hole, while the others are filled with surgical instruments, suction, cautery etc. A camera system is connected to the lens or optic system, so that everybody is able to view the progress of the operation. All these instruments are specially designed for this approach; the usual surgical tools cannot be used.

In the Library against the far wall is Didusch’s drawing desk, and the last illustration he drew before his death in 1982.

In 1915, illustrator Max Brödel gave Didusch the opportunity to become staff artist for the newly created Brady Urological Institute of Johns Hopkins Hospital, of which Dr. Young was the director. Didusch decided to give this a try, and the trial period developed into a lifelong, close association with urology. He was appointed an instructor in urology in 1949 by Dr. William W. Scott, and in 1953 he became the executive secretary of the AUA and served in that position until 1968. Didusch, who lived and worked at 1120 North Charles Street, had compiled an impressive number of drawings and texts and gave much thought to a central collection of urologic memorabilia. In 1968, he proposed the creation of a urologic museum and donated the extensive collection of his own drawings to the American Urological Association for that purpose.