AUA Summit - Running with the Current: Quackery in Electrical Medicine

Running with the Current: Quackery in Electrical Medicine

In our search for the universal panacea, we continually seize upon new inventions and apply them to medicine, hoping that we have finally found something that will cure all of humanity’s ills. As serious investigators and physicians began to evaluate the potential use of electricity as a method to treat medical diseases, so did entrepreneurs and quacksalvers who claimed to develop “Cure-Alls” for a large variety of medical illness.

Albert Abrams: The Dean of Quackery
In the field of electric medicine, the dean of quackery was Albert Abrams, MD, LLD, FRMS, of San Francisco. Abrams, a purported graduate of the University of Heidelberg (there is no record to confirm this) who pioneered a therapy called spondylotherapy – a percussive treatment involving electricity – was most notably known for his “Electronic Reactions of Abrams” theory (E.R.A.), based on the principle that electrons were the basis of life. A number of devices were based on this theory, devices for which a gullible public was willing to pay. 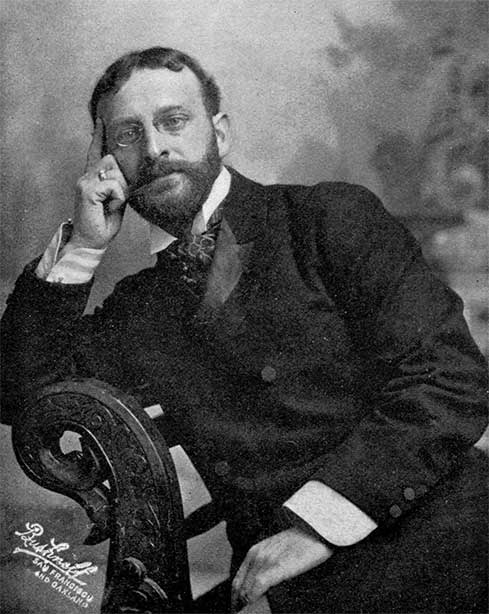 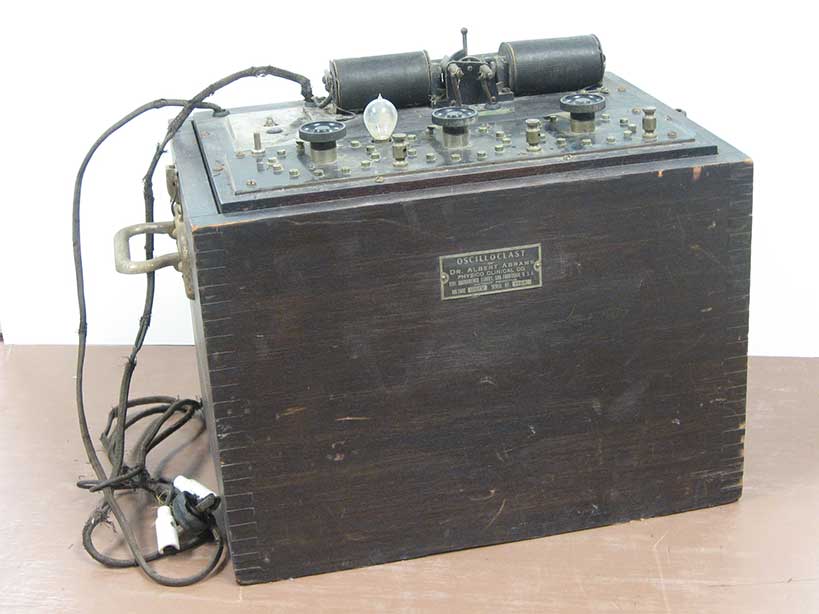 Albert Abrams and his Dynomizer

One of Abrams’ most “famous” machines was the Dynomizer, which could diagnose a patient using a drop of blood or a handwriting sample (either would do). Patients far and wide would send blood and/or handwriting samples to Abrams which allowed him to “treat” the patients long-distance. By 1918, he had built quite a business, leasing equipment and teaching courses in E.R.A. and spondylotherapy. Abrams had one condition for those who leased his machines: they could not open them.

As business improved, so did Abrams’ productivity as an “inventor”. Soon, machines were not limited solely to diagnosis; they could be used to treat the condition diagnosed. His Radioclast and Oscilloclast gained significant popularity as more and more patients – and E.R.A. practitioners – began using the equipment. By 1921, there were more than 3,500 people using E.R.A. techniques and machines to treat patients.

Abrams’ house of cards began to crumble when, in 1923, a man with incurable stomach cancer (said to have been diagnosed at the Mayo Clinic) went to an E.R.A. practitioner for treatment. After a number of “treatments,” the so-called doctor pronounced the man completely cured of his cancer. The man died a month later and a public uproar ensued, prompting many to question the efficacy of Abrams’ machines. The American Medical Association actively denounced the machines, despite their many notable defenders (said to include Sir Arthur Conan Doyle and Upton Sinclair).

It was the beginning of the end of the public’s acceptance of the machines. After a public debunking of Abrams’ technology in the pages of Scientific American magazine, physicians around the country challenged practitioners. When several AMA members opened one of the hermetically sealed oscilloclast machines, they found it was nothing more than a box full of wires, lights and buzzers.

Despite all the negative publicity, E.R.A. did not end with Abrams’ death; it was alive and well into the late 1920s, in part due to the many clinics offering this therapy.

Violet ray machines remain one of the more fascinating applications of electricity from the early 20th century. These vacuum electrodes used high-frequency current and were used to treat virtually any known disease. The glass tubes, which have a metal base that is inserted into the handheld current contact, come in different shapes and were used to cure strabismus, thyroid problems, nasal problems, pharyngeal diseases, problems with the cervix, vagina, rectum and prostate; really, any organ accessible to these probes could be treated with these devices. Dandruff was reportedly treated with ultraviolet lamps or violet ray combs. 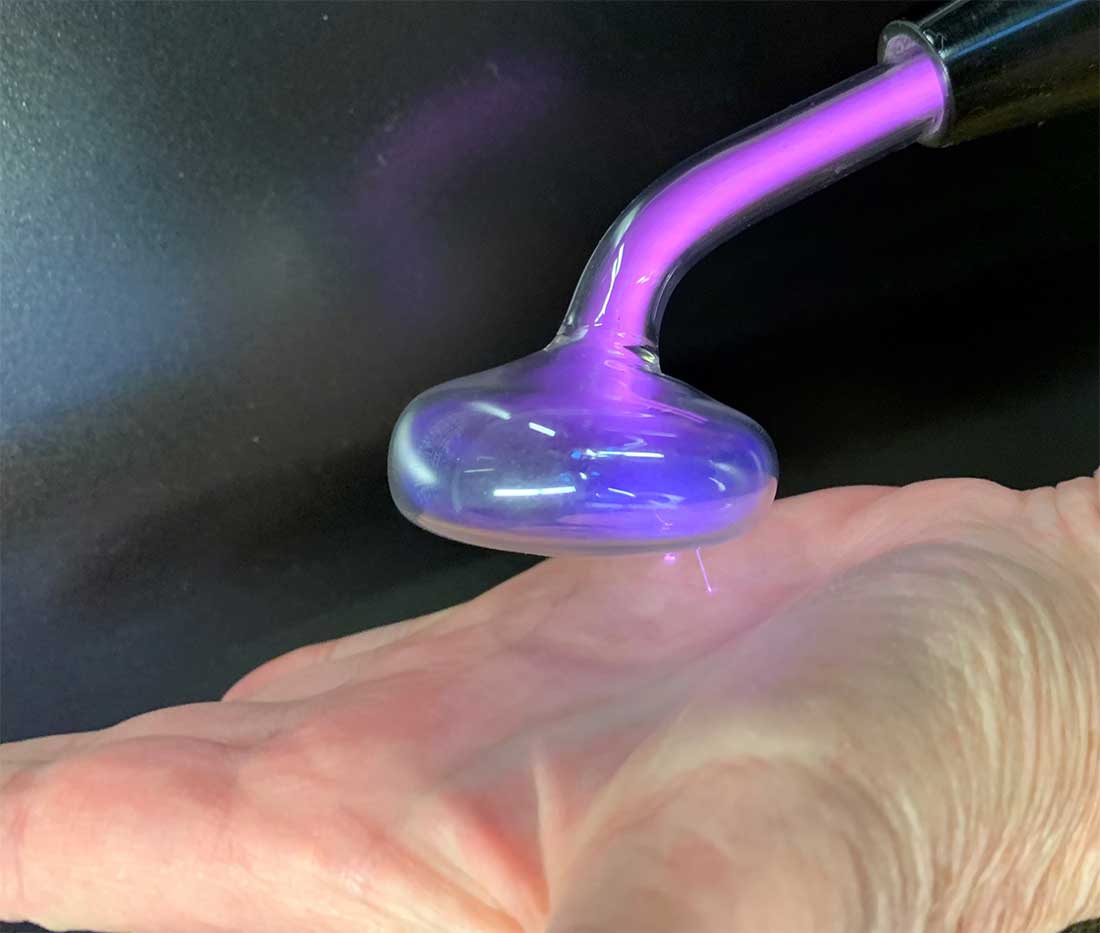 Though some practitioners would use these devices to treat any ailment, others approached their use with a hopeful skepticism. In his book Physical Therapeutic Technic, published by Saunders Company in 1932, Frank Butler Granger, MD, described the use of an ultraviolet ear probe to treat deafness by saying, “I always undertake the treatment of a case with considerable reluctance as the chance of success is slight, though occasionally the results are startling.”

Other inventors created fascinating electromagnetic equipment, claiming they were able to cure a large variety of the most common diseases. Some of these include clever wood-cased induction machines such as the Theronoid “horse collar” device, a large coil that was plugged into the 110 volt mains and worn around the neck or torso to bathe that part of the body in an electromagnetic field; the “Magneto-Electric Machines” from the 1840s, which included electrical stimulation of a variety of body parts, including the scalp for hair growth; and the “Elec-Treat Mechanical Heart” from the 1930s, which used Faradic treatment to alleviate pain, reportedly forcing oxygen through the skin into the body.

Galvanic batteries were also said to be able to cure virtually all diseases except yellow fever, cholera, dysentery, croup, congestion of the brain, bloody urine, influenza, pneumonia, spasm, worms, whooping cough and consumption. Boyd’s Battery, a booklet published in 1879, is full of testimonials that serve as proof for a battery that was worn on the chest like a pendant. The device came with the warning not to allow any other person to use the battery because, if you did, the battery could transfer diseases from the original owner to another. What a wonderful marketing ploy – everyone had to buy his or her own battery!

Quackery was rampant across the field of medicine. Even urology was not immune to the quackish application of electricity. The most famous examples of this were the Heidelberg and Pulvermacher Belts (from the late 1800s), which were cloth-covered voltaic batteries soaked in a vinegar solution and worn around the waist; reportedly, they would cure “weaknesses peculiar to men” – incontinence, impotence and multiple other nervous maladies. 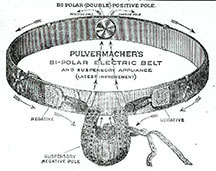 One of the first books to describe a particular application of electricity within urology was Beard and Rockwell’s Electricity (1871). In the chapter on the diseases of the male genital organs, the authors discuss using electricity to treat seminal emissions, premature discharge and deficient secretion of semen (these diseases were, according to the medical tenet of the time, caused by excessive sexual indulgence). Treatment for urinary incontinence in children was preferentially done by applying an electrode at the level of the symphysis and the second one to the perineum, aiming for “faradization” of the bladder neck. The authors also refer to an instrument designed by Duchenne, “the double vesical exciter,” an instrument with a curved tip with two metal branches that could be opened up to “electricize” the bladder internally.