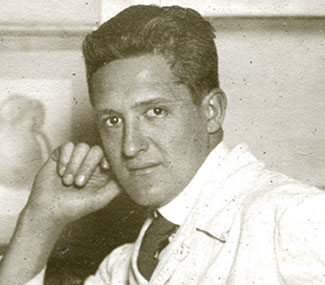 William Peter Didusch (1895 – 1981) was born on June 13, 1895 in Baltimore, Maryland. His family immigrated into the United States from Munich, Germany in the late 1800s. Didusch paid his way through the newly-created medical art school of Max Brödel at The Johns Hopkins Hospital by doing janitorial work. Brödel had done a good bit of art work for Hugh Hampton Young, MD at Hopkins and, in 1915, when asked to do some additional work, he decided to give one of his students the chance and offered the opportunity to Didusch, who by then had been working with Brödel for two years. Didusch took this job on a trial basis and remained for his entire life in urology, illustrating Dr. Young's major works, "The Practice of Urology" and his book on hermaphroditism, the "Clinical Urology" textbook by Lowsley and Kirwin, "Transurethral Prostatectomy" by Nesbit and "A Retropubic Prostatectomy" by Beneventi. Didusch became the foremost illustrator of American urology.

In 1971, after having proposed the creation of a urological museum at the AUA headquarters, Didusch was honored at a testimonial dinner, the proceeds of which founded a new museum named after him—the William P. Didusch Museum of the American Urological Association.

Didusch lived and worked at the AUA headquarters in a building that had been previously owned by Dr. Young. On August 4, 1981, Didusch did not come downstairs early in the morning to the AUA offices. He had suffered a stroke and died three days later.

Not all that Didusch drew was published, and not all operations that he illustrated have survived, but his skillful depiction of anatomy and surgery is as vivid today as when the drawings were created on his easel.