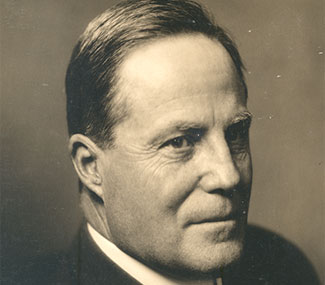 EL Keyes (1873-1949) was the 10th AUA President, a Professor of Urology in New York City, an aesthete, polyglot, and poet who, as his biographer PJ Stahl wrote was "among the best known urologists in America" (Stahl PJ et al. J Urol 176: 1946-1951, 2006). He was a larger than life personality, "famously delightful… (and) who could captivate and charm" the innumerable physicians who studied under him. With Hugh Hampton Young, he headed the US effort to contain the epidemic of venereal diseases in World War I which was thought to consume more than 70 million soldier-days of leave. An author of many treatises, including the premier textbook of urology used throughout the 1920s, he was also a gifted writer of prose and philosophy and delivered the keynote Presidential address, "The Art of History" at the 1916 meeting of the AUA. His perspectives often took a much broader, apolitical view.

"We are but motes and atoms in the bright sunlight of science" he wrote, "and we may indeed rejoice if…we are able for but one instant to reflect a single ray of scientific truth into the shadows of ignorance that surround us." He knew that while "the path of scientific progress may be narrow, it certainly is not straight." A consummate teacher, he implored a new generation of physicians to rise up, to be "humble, devoted, studious, clear-minded souls...great instructors…in the mysteries of life as much as in the mysteries of medicine, (and) great exponents of humanity itself." He ended his talk with these uplifting words, intended to invigorate the young and untested but also to reaffirm the dedication of the seasoned seniors, writing:

"Somewhere between the asceticism of the chosen and the degradation of the outcast there is a happy marital state where most of us may dwell, where Science of Medicine weds (the) Art of Healing. Here you will see the scientist come forth from his cell to gaze at the living things in the hospital ward. Here you will find the practitioner humbly confessing his sins to the priesthood of science, science humanized by the touch of art, and art sobered by the strength of science."