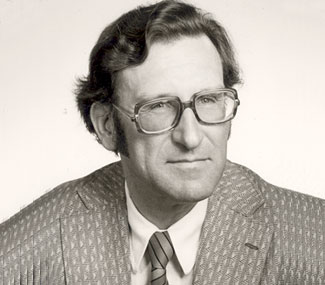 Born on October 22, 1923 in southern Germany (Württenberg), Hans Joachim Reuter, MD was drafted in World War II and served on the Eastern Front. An injury in 1942 prompted his return to Germany, and he began medical school in Tübingen and subsequently Heidelberg, where he finished in 1950. In 1951 and 1952, Dr. Reuter spent two years as a rotating intern and became impressed with gynecological urology in Wuppertal. He did his urologic training under Hösel in Ulm, finishing in 1957.

His major interest at that time was endoscopy. Shortly afterwards he opened his office in Stuttgart and began to build a small in-patient clinic. A prolific writer, he published nine books, mostly on endoscopy, and created nearly 20 movies. His many lectures brought him not only to the Western hemisphere but also into Eastern countries, and in the 1960s he met Dr. Goldberg in Riga which led to the introduction of electrohydraulic lithotripsy into western Europe and subsequently to the rest of the western world.

One of his major contributions was the development of low pressure irrigation during operative endoscopy, which allowed him to develop a radical transurethral prostatectomy, totally resecting the malignant prostate, including the capsule, even in patients in their eighties, with a mortality rate of less than one percent.

He and Iglesias created, nearly simultaneously, what is now the continuous flow resectoscope, and at the 1973 AUA Scientific Annual Meeting, Reuter suggested necessary design improvements to Iglesias.

Never one to hide his opinion of new methods or colleagues, Dr. Reuter clearly had adversaries but numerous good friends as well. Of his many contributions to urologic literature, the last of these will be published posthumously: History of Endoscopy, The Development of the Resectoscope. Dr. Reuter was an avid collector of urologic memorabilia that included books dating back to the 1500's (Vesalius, De Fabrica), early cystoscopes such as Nitze's original instruments from 1878 to the early 1900s as well as microscopes. Dr. Reuter was a major contributor of such items to the William P. Didusch Museum at the AUA. He died on April 18, 2003.