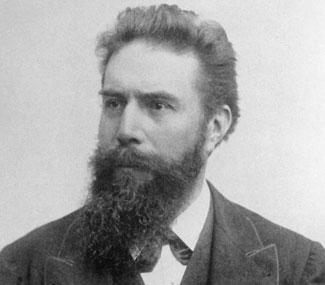 Wilhelm Conrad Röntgen, PhD was born in Rhenish Bavaria, was raised in Holland and attended school in Germany. After receiving his diploma in mechanical engineering, he pursued additional courses in physics and mathematics. Throughout his schooling, Roentgen found his passion spending his time in a physics laboratory in Zurich, Germany. With discipline and interest, he obtained his doctorate degree in philosophy at the University of Zurich in 1869.

Röntgen became a Professor of Physics and also served as the Director of the Physical Institute at the University of Wurzburg years later. He was elected soon after as rector of the University, an acknowledgment for his countless research contributions.

Despite this role, Röntgen focused much of his time on independent investigation, looking into the passage of electrical current through a vacuum tube. On November 8, 1895, he saw electrical rays for the first time. He spent the next 7 weeks experimenting and trying to explain this phenomenon to himself to make it presentable for the Würzburg Physical Medicine Society.

On December 28, 1895, Roentgen published a journal article entitled "On A New Kind Of Ray"; neither he nor the world were the same afterwards. Just one year later, the first X-ray image was one taken of his own hand in England.

Röntgen received the first Nobel Prize in Physics in 1901 for his momentous discovery.