The development of today's modern resectoscope is truly an American story, though based on an instrument developed in Europe decades earlier: the cystoscope. 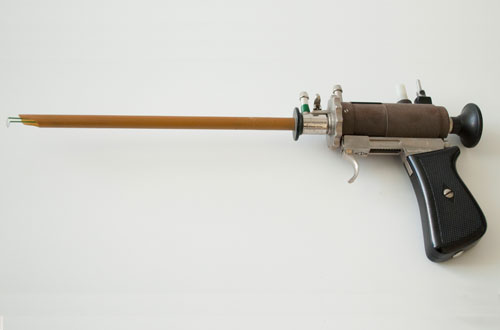 In the early 1900's the prevailing method of surgical relief for prostatic obstruction was either an open suprapubic prostatectomy or a transurethral incision of the prostate using an instrument developed by Bottini in 1874 in Pavia, which employed an electric knife blade. W. Wishard of Indianapolis modified this instrument and, like Chetwood in New York, performed his procedure through a perineal urethrostomy. This allowed better bleeding control and more accurate visualization of the area of surgery.

Hugh Hampton Young in his early years at Hopkins used both the Bottini incision and the suprapubic approach to relieve prostatic and bladder neck obstruction but was soon unhappy with the results, feeling that the surgery yielded inadequate results or was much too aggressive for the results achieved. After one of his patients died from complications in 1909 of a suprapubic approach, Hugh Young developed the first of the American punches by modifying one of his cystoscopes. In his workshop Young lengthened the beak of the urethroscope, cut a lateral window in it, and added a tubular knife that could core out pieces of tissue, though this was all done blindly. 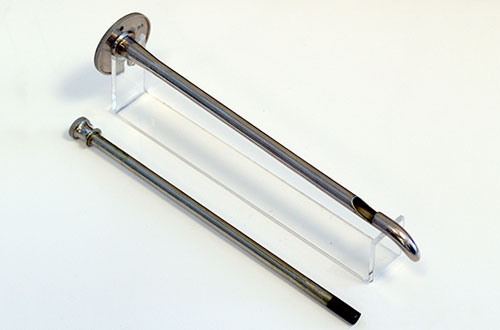 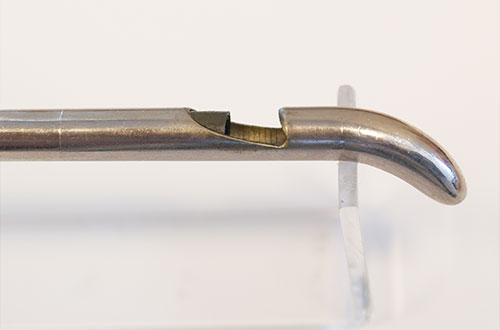 Less than a decade later, William Braasch at the Mayo Clinic began his modifications of the Young instrument and was soon joined in this endeavor by Hermon Bumpus and Gershom Thompson; in 1932 Bumpus designed a carrier for an electrode which could be introduced into the instrument under direct vision to coagulate bleeding vessels. Three years later Thompson presented his modifications as the "Bumpus-Thompson Cold Punch." A few years later John R. Caulk, also at the Mayo Clinic, began to develop a modified cautery punch. Most of the instruments from the Mayo Clinic were built by Philips and Drucker of St. Louis, Missouri. While Young's punch required the insertion of a cautery probe to control bleeding, Caulk designed an instrument that consisted of an outer sheath with a fenestra and an inner cutting sheath. The latter was insulated, allowing electrocoagulation at the time of cutting. His instrument did not have any fluid irrigation and local anesthesia was used for the operation by injecting cocaine through a long needle attached to the resectoscope sheath. In 1932 he began to work with Kackley and developed an improved cautery punch with an optical system and refinement of the cutting and coagulation mechanism, though the sheath remained virtually the same as that of Young. At the Mayo Clinic resections were done virtually exclusively using these prostatic cold punches. The advantage of these cold punches was the fact that the lumen was not narrowed by a lens system or cutting loop, thus allowing large quantities of irrigation fluid to pass, giving clear vision. Direct vision through a fenestra at the end of the instrument allowed viewing the prostatic tissue without magnification. The latest of these instruments was presented in Germany in 1976 by H. Frohmüller.

About the same time that Caulk was working on his instrument, Joseph McCarthy of New York developed a punch that he later equipped with his well-known foroblique lens, developed with Reinhold Wappler, founder of American Cystoscope Makers, Inc. Robert V. Day in Los Angeles also developed a cystourethroscopic punch; Abraham Ravich from Brooklyn in 1927 presented a cystoscopic punch that could be converted into a lithotrite for small stones when the tubular cutting knife was replaced by a solid steel rod.

A year later, in 1928, Frederic E.B. Foley from Minneapolis presented an interesting instrument that was basically a cystoscope with a large beak, at the tip of which a thin steel music wire ran back into the sheath about an inch further down the shaft and allowed the operator to literally "core" out a cone-shaped column of prostatic tissue using cutting current. A separate instrument was then used to chop the large cone into smaller pieces that could be removed through the sheath of the cystoscope.

The use of electric current in prostatic surgery had made its grand debut through Edwin Beer of New York in 1910 when he showed that high-frequency current could be used underwater without damaging cystoscopic instruments. Based on his discoveries, Maximilian Stern began to work in the early 1920's on an instrument that he eventually presented to the New York Academy of Medicine in January 1926. This instrument allowed him to remove longitudinal "spaghetti-like" sections of prostatic tissue; Stern called it the "resectoscope."

The resectoscope had a number of problems, and one of the people who was interested in testing it, Theodore M. Davis, began to work with Stern's instrument after obtaining a used one from Reinhold Wappler of ACMI.

Davis, who had initially been an electrical engineer, redesigned the loop, strengthening it, and increased the size of the fenestra and the instrument shaft. The problem of bleeding encountered with the Stern resectoscope was decreased by using high-frequency cutting current and low-frequency coagulating current combined into one machine which was worked with a "double-throw footswitch," which is still in use today. He presented his results with a movie at the AUA meeting in 1931; his work was harshly criticized by Randall and Lowsley who said that this "whittling procedure, which I object to seriously" would never amount to anything and that it was "technically impossible to remove the prostate adequately." Davis, despite such negative comments from his peers, continued to work on the improvement of the resectoscope and constructed, together with Bovie, the forerunner of today's electrosurgical units, the "Davis-Bovie Electrocautery Equipment" with a pedal that allowed (and still does) urologists to switch from cutting to coagulation.

At about the same time Thomas Kirwin of New York had designed a "Rotary Resector," consisting of an outer sheath with a large fenestra and an inner sheath – the fenestra of which was a cutting blade. This inner sheath could be rotated, thus cutting the tissue laterally rather than longitudinally as the other punches cut.

In 1948 Kirwin presented a different version of the same principle, this one called the "Improved Rotary Resector." In this instrument, he used the McCarthy beak and the McCarthy foroblique telescope, but his loop again rotated around its longitudinal axis, cutting laterally. Thus the tissue and the loop itself were always within the field of vision.

A few years later, Joseph McCarthy began to work with the Davis modification of Stern's instrument and made additional changes, the most remarkable of which was the bakelite sheath with a frontal opening rather than a side window and a foroblique lens he had developed. Also, while the instruments of Stern and Davis cut toward the bladder, McCarthy's instrument moved the loop from the bladder towards the operator as most modern instruments do.

Eugen Joseph of Berlin had visited Stern and watched him perform his TURP's. He invited him to show this procedure at Joseph's clinic; Stern visited Berlin in 1927 but his performance of a couple of TURP's left a bad impression since two of his patients died. Instruments were eventually built in Europe beginning with von Lichtenberg in Berlin and later Staehler, Mauermayer, Marberger, and Hösel. Frohmüller, who had worked for a time at the Mayo Clinic, developed his own prostatic cold punch after his return to Germany.

The Davis-Stern-McCarthy instrument underwent a number of additional modifications, each adding to the ease of operation with this instrument. The most significant of these contributions were made by Reed Nesbit (Ann Arbor, MI), who created the first instrument permitting one-handed transurethral surgery in 1938. The working element was no longer moved through a rack and pinion mechanism but pushed with a thumbhold against a spring that drove the loop back to its resting position.

A few years later in 1945, George O. Baumrucker modified Nesbit's resectoscope, by reversing the drive mechanism of the working element: the loop was now pulled through prostatic tissue by the forefinger resulting in "active cutting."

While Baumrucker, concerned with the possibility of overfilling the bladder during resection, described in 1947 a pressure gauge incorporated into his resection setup to alert him to increasing pressures, it was C. D. Creevy who first pointed out the same year that transurethral resection can lead to uremia and other serious events. He showed clearly, as suggested earlier by John Emmett, that "sterile water used as an irrigating fluid during transurethral resection could enter the prostatic veins and produce hemolysis, thus damaging the kidney exactly as does a transfusion with incompatible blood." These findings and subsequent work by others led to the development of low-pressure resection systems, both in the U.S. and abroad.

In 1948, José Iglesias, then still in Cuba, developed the leaf-spring-drive that truly made the resectoscope an easy one-handed instrument. After several years in prison during the Castro regime, he was eventually released and moved to New Jersey where he developed, with input from H. Reuter in Germany, today's "Continuous-Flow Resectoscope."

Other major changes in modern resectoscopes are the computer-generated lens systems, beginning with the rod lens of Harold H. Hopkins, and the fiber-optic lighting systems, returning us to the early days of endoscopy when the light source transmitted light from the outside into the body cavity.

For more information on the history of TURP, see the attached AUA publications:

And the fascinating article by Sally Wilde, PhD, See One, Do One, Modify One: Prostate Surgery in the 1930s from Medical History (2002)