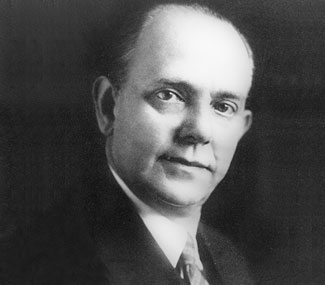 Alexander von Lichtenberg, MD was born on January 20, 1880 in Budapest, Hungary. Dr. Lichtenberg went to medical school in his hometown and passed his medical boards in 1902. He became an assistant at the Institute for Anatomy and, a year later, left for Heidelberg, Germany to study with Vincenz Czerny.

In Heidelberg he also got to know Fritz Voelcker, MD, eight years his senior, who became a genitourinary surgeon. The two of them eventually founded the "Zeitschrift für Urologische Chirurgie." Dr. Lichtenberg went to Straßberg in 1906 and, when offered a department in Budapest, went there in December of 1913, but shortly thereafter felt that he wanted to return to Straßberg. In 1920, he moved to Berlin where he quickly became a member of the Berlin Urology Society. Dr. Lichtenberg asked Paul Rosenstein, MD, another Berlin urologist, for collaboration on some scientific projects. Both of them were interested in pneumoradiography, and both began to work on producing X-ray images of the urinary system, injecting sodium iodide intravenously. In the mid-1920s, Dr. Lichtenberg was joined in the lab by a young Moses Swick, and together with Arthur Binz, the three developed uroseletan, an iodated imaging compound with relatively low toxicity.

The social and political situation in Berlin at this point became more and more tense. Dr. Lichtenberg, who was part Jewish, was persecuted by the Nazis and lost his teaching credentials—he then immigrated to Mexico. Accompanied by his family, he arrived in Mexico, where he settled, hoping he could eventually teach again. However, that did not transpire; he only received permission to open a private practice. He continued to enjoy life, but early in 1948 developed intense pain in his right flank. Dr. Lichtenberg was diagnosed with a regional ileitis. A mild diabetes progressed, eventually complicated by pylonephritis and hardening of the arteries. Von Lichtenberg died on April 12, 1945. A few months later, during the German Urology Congress in Munich, one of his students, Ferdinand Miay, gave a eulogy to his teacher in the same room where 20 years earlier von Lichtenberg presented the successful results of intravenous pyelography.