Curiosity Fueled by a Candle: Cystoscopes Allow Physicians to Peer Beyond and Within

The ability to probe the body's inner geography has been a boon to the world of medicine. Thanks to endoscopic techniques, urologists have illuminated non-invasive access to our most intimate crevices to diagnose or treat disease. Yet centuries ago, men of medicine could only dream of such routine visualizations, even as they pioneered the "cystoscope," the blueprint for all other endoscopes.

Many inventors and instrument makers would collaborate to turn the primitive prototype proposed in 1805 by Germany's Philip Bozzini into the sophisticated fiber-optic systems used today in almost every surgical specialty and even the industry. Though ridiculed by the medical faculty of the University in Vienna, both Bozzini and his "Lichtleiter" would light the way for physicians seeking insight into the cavities of the human body. 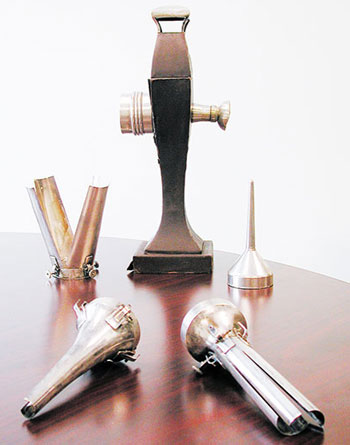 Inspired by Bozzini's instrument and led by such visionaries as Antonin Jean Desormeaux, Francis Richard Cruise and Joseph Grünfeld, German physician Maximilian Nitze would introduce the first direct-vision scopes to view living patients' urethras, bladders and larynxes. Premiering his first "kystoskop" on October 2, 1877, Nitze used an incandescent platinum wire loop to illuminate the bladder from inside, and a system of lenses to magnify its image for the viewer outside. However, the electricity that caused the wire to glow also made the instrument very hot, so Nitze had to create an ice water irrigation system to keep the scope cool enough for clinical use.

Meanwhile, in the United States, Philip Skinner Wales, a postgraduate student at the University of Pennsylvania, developed a cystoscope in 1860 and had it made by noted Philadelphia instrument maker Horatio Kern. In 1868, Wales described his scope that used an ophthalmologic mirror to reflect light down the narrow channel, thus obviating the heat that accompanied electric light in these early days. This scope, the earliest by an American inventor, is owned by the AUA’s William P Didusch Center for Urologic History.

Turning ideas into scopes required much collaboration. Nitze relied on Austrian manufacturer Joseph Leiter, while American physicians called on German immigrant Reinhold Wappler—known by the early 1900s as a superb endoscopic innovator. Though the concept behind them was popular, endoscopic devices gained widespread appeal only after the development of the incandescent lamp by Thomas A. Edison in 1880. 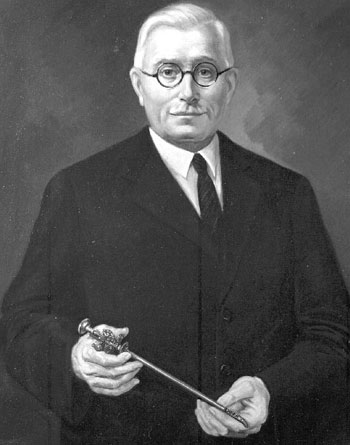 The mignon lamp illuminated endoscopes until fiber-optics took center stage in the mid-1950s. With this technology, doctors could transmit images by flooding the bladder and other interiors with light traveling along glass-fiber bundles.

British scientist John Tindell had established the principle of internal light reflection inside glass rods in 1872 and German Heinrich Lamm confirmed that optic fibers could transmit body images in 1930. But fiber-optics wouldn't emerge as a practical medical technology until 1954 when British physicist Harold H. Hopkins (with N.S. Kapany) produced the first usable system. It was Dutch optics professor Abraham van Heel who proposed protecting those fibers from "leaking" light by "cladding" or coating them with a transparent sheath. Van Heel's suggestion unlocked the secret of continuous illumination. Both contributions inspired the first fiber-optic gastroscope in February 1957 and a ureteroscope in 1960. Refinements followed, including Hopkins' own rigid endoscopic "rod lens." Introduced in 1960, it combined air with long glass pieces ground, on their ends, into optical surfaces. First applied in 1967 to a cystoscope by Karl Storz, it produced brighter, sharper and larger images than previous prisms, mirrors and lenses. By the 1980s, scientists showed that fibers and lenses could be married into fiber-optic coaxial bundles, with one package of whisker-thin strands carrying light and another returning images. These slender parcels allowed greater flexibility in traversing the urinary tract, turning corners without distorting images.

Today, endoscopy is so refined that urologists probe with flexible cystoscopes advanced by pencil-lead-sized tips that can be maneuvered. Spear-like sheaths or "trocars" provide the working channel through which urologists and other surgeons can pump carbon dioxide or place catheters and instruments when doing laparoscopic—or buttonhole—surgery. The spin-off? Less guesswork and more on-the-mark decision-making along with fewer side effects and quicker recoveries. As superior as they've become, however, these cystoscopes are bound to be upstaged by next generation models that transmit brighter pictures with fewer, stronger optical fibers.

Yet nothing will surpass Nitze's initial contribution. Granted, he lit the bladder with internal incandescence while others proved the power of imported illumination. But, like Bozzini, his concept of organ illumination forever changed how urologists inspect the urinary tract. In his textbook on cystoscopy in 1888, Nitze stated, "This writing presents only a framework, the complete construction of which will be accomplished over the course of years through the joint work of numerous researchers."